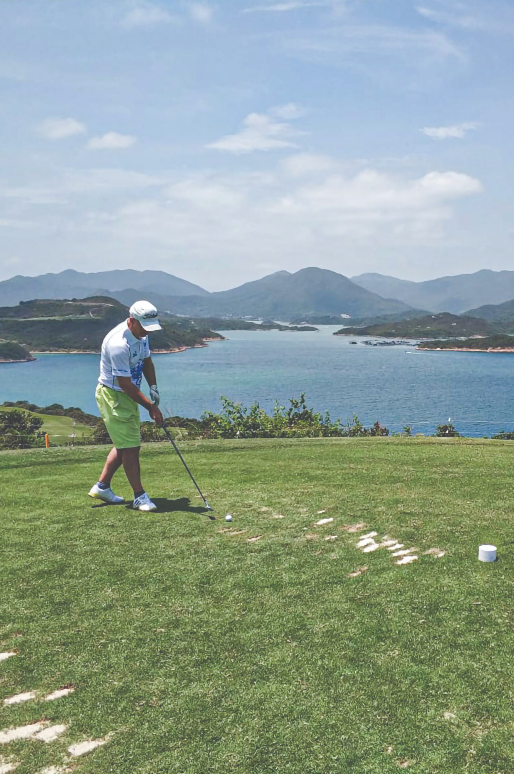 Kau Sai Chau East Course
In our 6th match of the year (the total number played in Covid-19 hit 2020!), The Golf Challenge Trophy is an annual fixture first played in 2001 and usually in Macau. With the ongoing quarantine restrictions on both sides of the border, again thanks the Kai Sai Chau, we could keep this fixture alive.

WAGS are led by a notoriously experienced campaigner who unfortunately couldn’t play in the end, due to a bone spur in his elbow trapping a tendon for which he will soon have an op. He replaced himself with a strong player, meaning it was highly unlikely our famous victory last year 5 ½ - ½ would be repeated.

We had seen some rain showers earlier in the week leaving the course damp in patches. A few more were forecast in the morning, but the improving forecast had our 24 golfers optimistic.

Jonny Brock and Andrew Wood teaming up for just the second time, were first out versus Oli Li and Mike Edie. Oli set the tone from the off, with a birdie on the first hole. After going 4 down after 5 holes, it was a case of hanging in there. Around the turn, Andrew inadvertently played Jonny’s ball, evened out by a putting rules violation from WAGS a couple of holes later. Still, the WAGS boys continued “ham and hamming”, with only a birdie on the 13th keeping the match going. A good fight to the end, but at 2 over par gross on match conclusion the 16th, our opponents closed out the match 3 & 2.

Jason Waldie, our current Club Champion and Taylor Hui were up against familiar foes from MiB and a decent pairing of Tim Chillington and Alain Roberge. Taylor had struck a psychological blow the previous Friday by easily beating Alain in a dress rehearsal. However, Alain this time played a blinder on this tricky course, resulting in another win 5 & 4.

Our Ladies pairing of Jenny Chapman and Malou Waldie have a polished record as a pair, so were looking to maintain that streak and stem the tide for HKFC. They were up against Daniel Rupp and Barry Cronin. Giving shots, but playing a much shorter course, surely this one was ours. In a game of two halves, Jenny took the first 9 and Malou the second. This  lead to a 5 & 4 spanking for the girls. Match situation, WAGS leading 2 -1.

The fourth match-up had our clutch putter John Thompson and Justin Faulkner take on their Duncan Paul and David Law. It was a very social grouping, with David entertaining this fourball with his usual anecdotes. John did most of the damage with the usual few clutch putts, mostly on the back 9, resulting in a very close win 1 up. Match even, 2 -2, with just 2 to play.

Alastair Murray and Chairman Phil Head were not to know the match situation playing against plus handicapper Keith Brooks and Seb Hughes. Seb was in fact the dangerman, having 2 shots on 8 holes and he did not disappoint. WAGS winning 4 & 3 and nudging ahead 3 -2 in the process.

Our anchor pairing of Jukka Hakli and Simon Hague were one of our strongest parings, so, with one match to complete before the post-match frivolities, could overturn Darren Nuggent and Steve Smith. Simon set the tone with an Eagle on the first, with our pair never looking back. In the end, this one almost got away, but this solid 4 & 2 win resulted in HKFC drawing a very entertaining and fun golf contest 3-3.

A special thanks to Jukka who played his last match for the team, who by time of issue, will be back home with his lovely wife and family in his native Finland. We wish him and his family all the best and hope to see him back on our fairways one day soon.

So, the Golf Challenge Trophy therefore remains in our burgeoning trophy cabinet for at least another year and we look forward to defending it against these charitable gentlemen next year, hopefully back in Macau as usual.

For the records, in this match, this was our second draw with HKFC now leading overall with 11 points, against 7 for WAGS.

So, HKFC retain the trophy for the fourth year in a row, so I say bring it on next year!