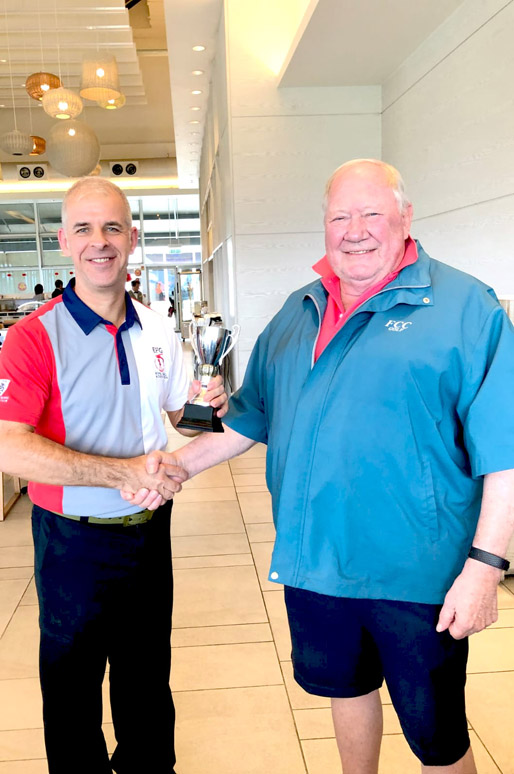 The Golf Society’s first match of the 2020 season and my official debut as Captain was against the FCC, a very eclectic opposition. Historically, we have done well in this fixture with a draw, followed by 5 subsequent wins. To try to even things up, we decided to stick with last year’s format of 90% of our handicaps, which is generous to the higher handicapping team in the 4-ball better ball format we play. An unenviable task of trying to maintain our unbeaten record of six years, so what could go wrong?

On arrival at Kau Sai Chau, we found the course overcast, mild at 18C with a fresh breeze. No sign of the recent sunshine, with many choosing to don a jacket and long pants.

Some downed the value-for-money breakfast and most had a decent loosener with a bucket of balls, before proceeding to the 1st tee to do battle. We were led off by Alastair Murray (“Never Hurry A Murray” just making his tee-time!) and John Banks, who found the going hard. One of their opponents was smashing his drives 300 yards! Next up were Dallas Reid and Elsa Lee, who know each other’s games inside out and came through strongly. Match tied after 2 flights. Jonny Brock and Chris Frost’s match became easier before it started, as they were informed one of their opponents’ car was hit by a scooter the night before, so unfortunately they had to pull out. HKFC now 2-1 to the good. Justin Faulkner and Jenny Chapman steamrolled their way through to the biggest win of the day with aplomb, enough now to ensure we couldn’t be defeated. Andrew Wood and Darren McEntee (nice to see Darren back in the fold after a 4 year absence) combined seamlessly for the deciding win. Last, but by no means least, Jukka Hakli and Bill King shrugged off going down in their tussle by 3 holes early on, only to switch on the burners through the halfway mark and seal the victory on the 15th hole, by yet another impressive score line. 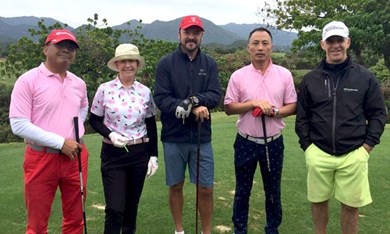 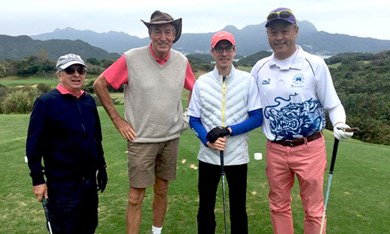 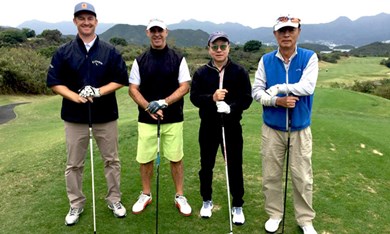 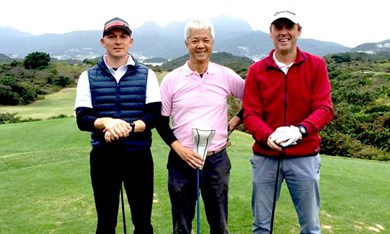 Russ Julseth, the genial non-playing Convenor of FCC had said to me before any ball was struck that he thought he had 3 strong pairs and had dropped himself to accommodate his best players. So, as it turned out that we won the last 5 matches, and final score 5-1 in favour to the HKFC, it was not really close - with his prediction perhaps not taking into account the quality of our own pairings!

The match was followed by a pleasant lunch at the Kau Sai Chau restaurant washed down by the odd ale, and numerous tales of new golf clubs acquired recently working wonders under the pressure of competition.

Thanks to Dallas for arranging a substitute trophy (where in the world did the original silverware go??) and to Russ for doing the hosting and arranging, in what is always a great way to start the New Year. Also, a mention to all the players for kindly taking the time to compete in this very social fixture, and to Kau Sai Chau for a North Course which was in very good condition with firm lush greens and to their ever helpful staff.