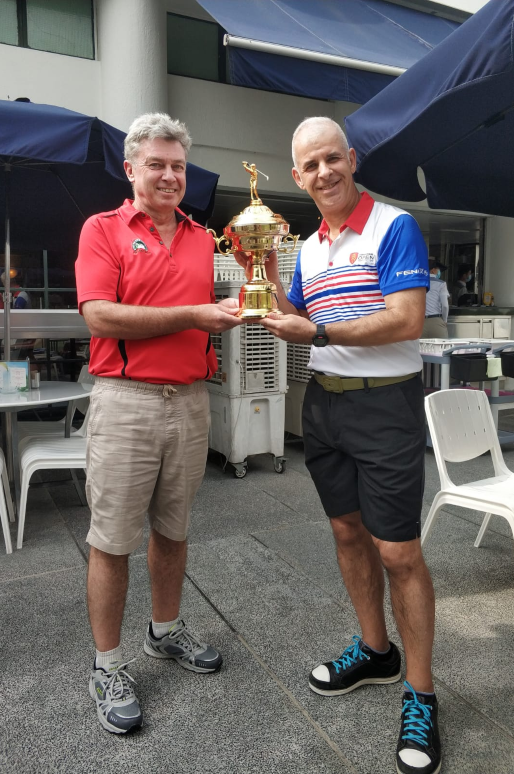 HKGC Fanling - Eden Course
Another match cancelled last year due to the pandemic, this match was eagerly awaited by both sides. This has been an annual fixture for a few years now and a match we have never lost - no pressure! Normally held in Macau, for the first time we kindly invited by our hosts to play at HKGC Fanling and on the spectacular Eden course. In a way to make the match more social, a 2-ball scramble format was agreed and nice sunny day greeted us in The New Territories, with a steady breeze to keep us cool and test our target golf.

Out first seasoned campaigners Jonny Brock and Ryan Black, the latter sporting his new match shirt were quickly into their game against James Snelling and John Berry. They were never headed and were -2 on the card when they closed out on the 15th hole for a 4 & 3 win. HKFC 1 up.

Our European pairing of soon-to-depart Jukka Hakli and Eric Desgouttes also got out to an early lead as Paul Over and Jonny Sun took a while to settle. In a match where no shots were given, it was a fairly even affair with both pairs combining well. In the end, our pair stayed just ahead and credit to the both of them in a solid 3 & 2 win. HKFC 2 up.

Squashies Phil Head and John Thompson had never played together in a match and were told that one of their knowing opponents had lined up a 24-pack of beer to place in their cart, given their reputation and to make them crazy! Well, whatever happened actually seemed to fail as our pair gelled. Whilst it was close throughout, HK Seniors JP Cuvelier and Peter Barrett got to 1 up at the turn. On the back nine, John made a couple of 20 foot putts to get us in front. Then with 3 to play, we were 2 up with both Phil and John missing short putts that on most days would have been a gimme. So, now only 1 up, with 2 to play. JP birdied the 17th to make it all square going down the signature 18th. It was a very tense hole, but we managed to win it to win the match, 1 up, with fist being bumped. A mention for Peter, who is 78 years old and was allowed to play off the White tee boxes. He out hit everyone on the 1st hole and our pair were then probably thinking did they make the right call. Fortunately, all’s well that ends well. HKFC 3 up. Match over.

Next up were the familiar pairing of Andrew Wood and Matt Burke against Lawrence Eisentrager and Robin Wong. Andrew and Matt ‘ham and egged’ very well taking a 5 up lead and cruising. After a few halved holes, time was running out for the HK Seniors, who finally succumbed to a 7 & 6 defeat. At that point, our pair were par for the course. HKFC 4 up.

Last out were Tom Hayman and Will Glover who were not to know that the match was already won and that we would be bring ‘The Golden Globe’ Trophy home for another year.

They were up against Captain Chris Burley and Chris Lavender. The latter a former Gurkha Officer who rattled off stories off his colonial days in Hong Kong manning the New Territories border with the PRC and sweeping up the Illegal Immigrants! Our pair were down most of the way, but even with some inconsistency they did well late on, managing to turn a position of 2 down to a 2 up win. HKFC 5 HK Seniors 0.

With two matches going to the last hole, the format was deemed a winner. It was very social and enjoyable for all and will be considered for the fixture next year, hopefully back in Macau early 2022.

The 19th hole verandah (or is it veranda) at Fanling is one of the best anywhere in the world, so many stayed on for what was a very social occasion. Not to be done, a few stalwarts made it back to The Sportsman’s Bar in what was a real good day out. Special thanks to both Chris Burley and Mike Edie for all their arrangements.