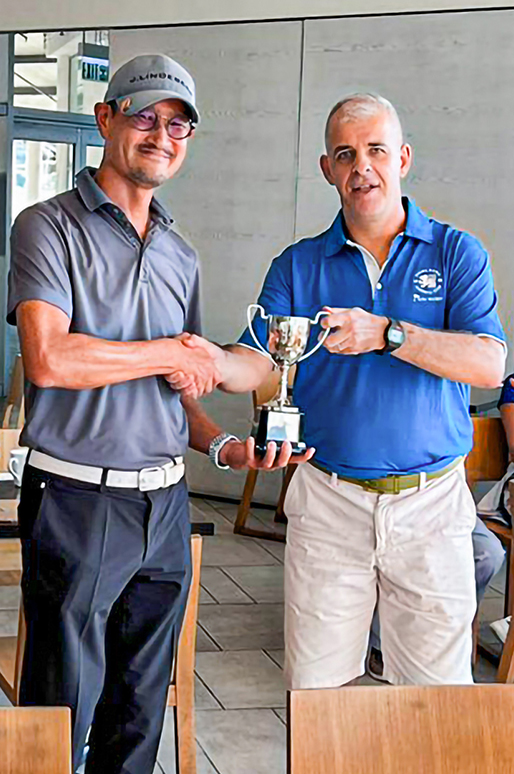 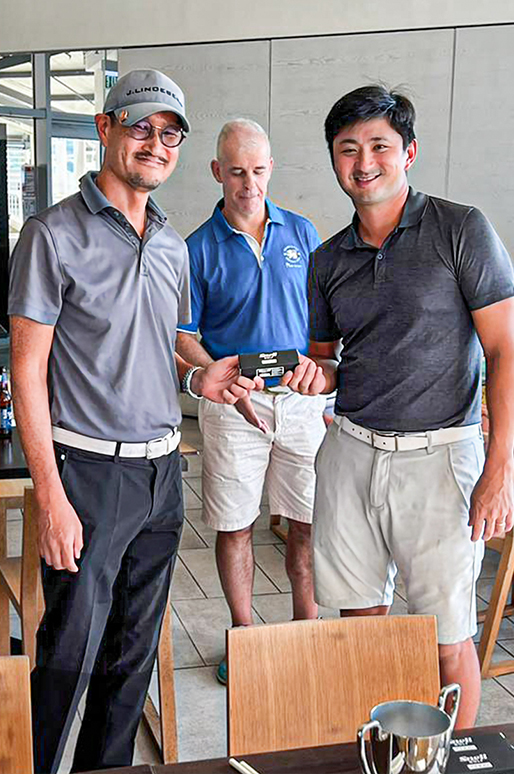 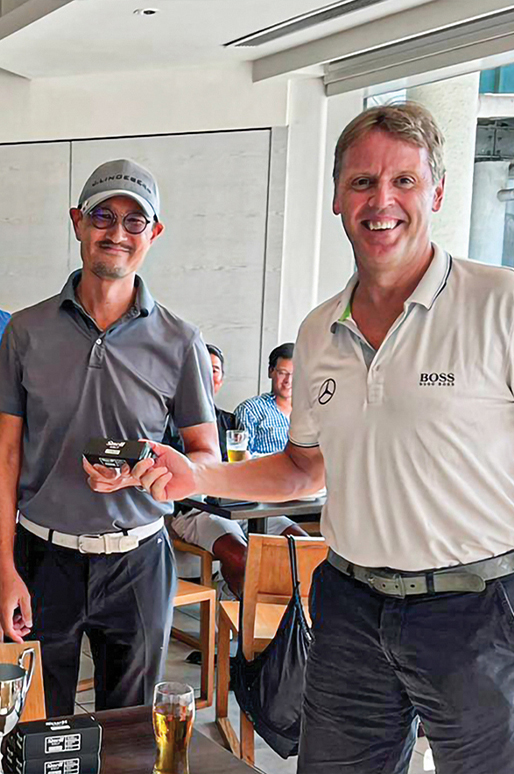 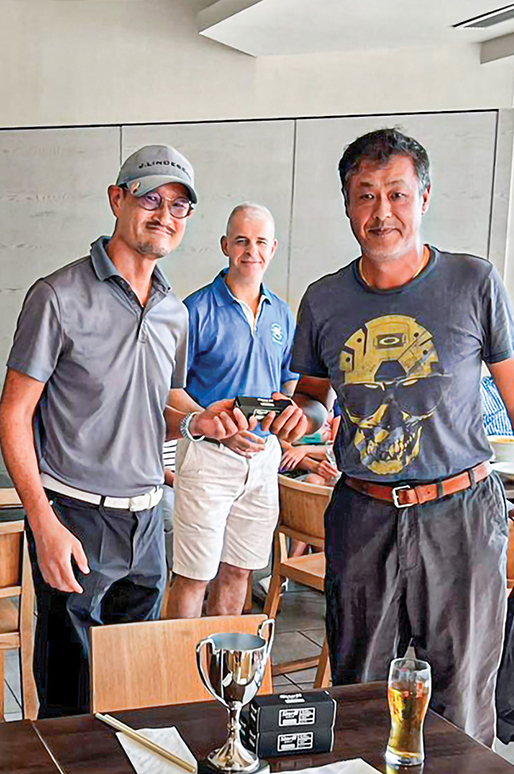 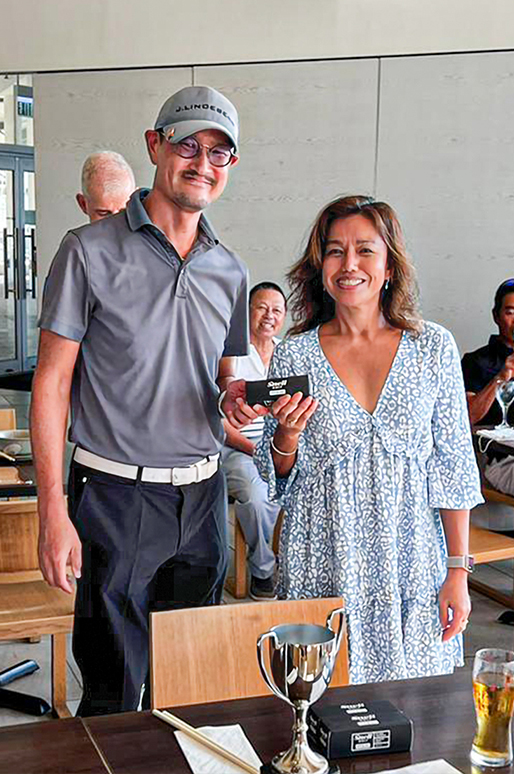 The North South Trophy is an annual fixture first played in 2015, and over the years, has been played at Kau Sai Chau, Clearwater Bay and in Macau. It was unfortunately not played last year due to the pandemic, so this “Hong Kong Island derby” was even more eagerly anticipated than normal.

The Country Clubbers drew this match in 2018 in Macau and after losing narrowly last time out in Clearwater Bay, were looking to get their first “W” this year. They put out a team who are almost all members of either Clearwater Bay, Hong Kong Golf Club or Shek O, so we responded with a team good enough to beat any opponents, even with a few withdrawals.

The weekend had brought us a Black Rainstorm Signal and Typhoon Lionrock, with a T3 Signal being enough to close the course. Fortunately, the T8 Signal had come down around midnight on Sunday. As we arrived into Sai Kung, whilst the gusty winds remained to keep us cool and tested, all typhoon signals were down and the sun was starting to break through.

Given lots of heavy rain since Friday, the following local ruling was agreed by both Captains:
“Preferred lies in closely mown areas. i.e. fairways and areas around the green cut to fairway height or less. Mark your ball and lift, clean and place within a scorecard length of your original ball position.”

Our lead pair of Marco Jorge and Chris Burley were taking on their Captain and HKGA Rules Official Roy Lee and Alfred Siu. A few mistakes by HKFC meant 2 down early doors and some concern that the match may get away. However, our pair started to gel before the turn and clawed themselves back to complete a very tidy 4 and 3 victory.

The next contest took place between Justin Faulkner and Matt Keefe against Harvey Lee and Albert Rodrigues. Matt was excited about making his debut and was put in good hands with Justin’s experience of such matches. No need for any worries in this one, as the Sports Road pair turned on the auto pilot for another
win 4 and 3.

Jonny Brock partnered Malou Waldie in their match against Albert Cheung ex-Captain Simon Cheung’s father) and Esther Ma. With Malou not missing a fairway and Jonny floating in a ball to a mere 2” on the par 3 14th hole (yes, he did get his birdie!), it was choking any attempt from the opposition to get a foothold in this match. Suffice to say, a big victory ensued 7 and 5. In hindsight, as Albert is 74 years old, perhaps we should consider in future matches, anyone over 65 years old warrants playing off the next forward tees?

So, with the first three matches going our way and the trophy therefore retained for another year, all we needed was a half point for outright victory with three chances to do so. Could our next pair bring home the bacon and shut the door?

Andrew Wood and Nick Allen looked a decent bet on paper to bring home that half point against Rustom Jokhi and Patric Gigele. Clearly, the HKFC pair were living up to the task as they raced to 6 up after only 8 holes. Then came the comeback and a slight wobble as the debutant Big Austrian chef started to nail his long ball much straighter. However, the holes were running out now for the Southsiders as it went back to 6 up to the good guys after 12 holes. With the finishing line in sight, a birdie from Andrew on the 4th hole (our 13th hole) proved lucky for some, closing out the match for another thumping 7 and 5 win. Gross 6 over par better ball from the Happy Valley pair was ham and egg play at its finest. Overall match position now 4-0 and the trophy defended in style!

The penultimate flight paired Bill King and Helen Hayward against Michael Leung and Jasmine Chee. Jasmine is part of the Hong Kong National Team and a US collegiate golfer, playing off an accomplished +1.2 handicap. Bill won’t mind me telling you he is undergoing golf lessons for a swing rebuild and even had me taking a video of his swing on the practice range! Jasmine was getting irritated with the odd bogey but kept her composure enough to shoot a tidy gross 73, together with Michael contributing on a few holes. It was enough to take their match 2 and 1.

Our anchor pairing brought together Terry Wright and Henry Lai squaring off against Simon Cheung and David Lam. Not too many shots being given/received in this high quality contest. Simon is forever the gentlemen and refused to use the drop zones, even when having a bad day. Not sure what his partner made of that! Clearly, that would contribute to any downfall, and with our pair being too consistent, we took this match 5 and 4. Therefore, HKFC won the contest 5-1.

Most stayed on for drinks and snacks at the 19th hole. It was great to see the Country Club folks again, always a fun and social match - and weren’t we super lucky with the weather, just about getting that small gap between the two Typhoons! Note: I am tapping out this report as Typhoon Kompasu batters Hong Kong. Lady Luck does even out and she was
certainly on our side this time.