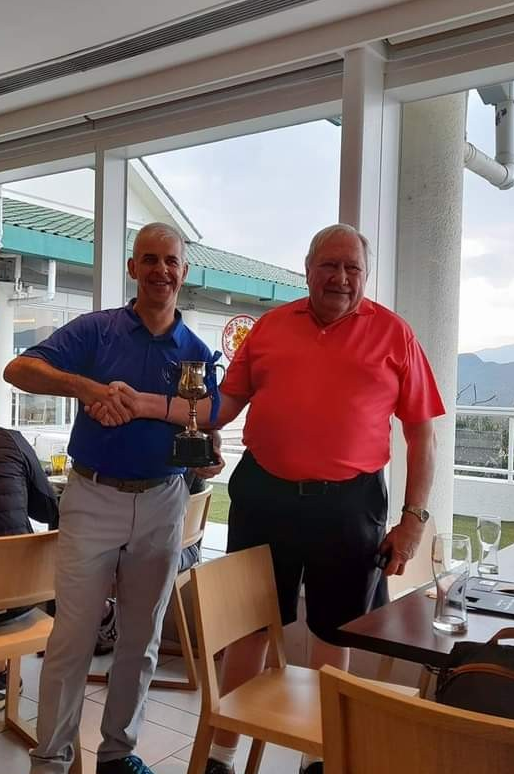 Golf is back! This was our first match of 2021 after being postponed from January due to the continuing Covid-19 shut down of all golf since early December. This has been an annual fixture since 2014, where FCC gained a creditable draw, but have lost ever since. Normally held in Macau, for the third successive year, we were back at Kau Sai Chau and the North Course.

The Hacks vs. Hackers trophy somehow went missing in 2019 between Sai Kung and Sports Road. Fortunately, our eagle-eyed Captain saw it buried amongst the Lawn Bowls silverware in our shared trophy cabinet! It’s an aptly named cup and rather beautiful, so happy it’s back with its rightful owners. Two rusty teams and us not putting out our “Big Guns” due to our rotation policy would make this a more closely fought affair.

After months of glorious sunshine, rain was to greet us as we entered Sai Kung town. Not ideal, but the forecast was promising. Unfortunately for FCC, one of their players could not get his retractable car roof to work and pulled out due to the rain! They must be cursed, as one of their players also pulled out last year, when his car was hit by a scooter the previous night. Would they rue our extra man again I wonder?

Fergus McCoig and Nick Allen were first onto the 10th tee (our 1st), to get the action underway. They were up against the lone Jeremy Bolland, so surely, we could get off to a winning start? Fergus hits it long and Nick putts well even with his 3-wood, so what could go wrong? I saw them approaching the 6th green where it was all smiles, as they had already closed out a 6 & 5 win. HKFC 1 up.

Stalwart Chris Burley and Don Roberts were playing for the first time together, so I wondered if they could “ham and egg” well enough in this all HK Seniors GS match-up. Greg Cornfield and Fritz Pfrang are a seasoned pair, so this this social affair changed a little after our pair went 3 down after just four holes. However, they turned it around by the back nine to get themselves level. Tidy golf being played, alas unfortunately for our pair one had 7 pars and the other had 6 pars, all on exactly the same holes! That's just the way it goes sometimes in better-ball. FCC winning 2 & 1. Match All Square.

Andrew Wood and debutant Rich Maton needed something to nudge the team ahead against James Au and Matt Chung. Thankfully, Rich showing no newbie nerves started well with the Captain somewhat shaky. The North Course plays longer than The East or South and we were winning the par 4’s and 5’s to put them under the cosh. By the 10th hole, a strong lead had been built and with Andrew now finding his form, we were not letting them back in. Fists were bumped on our 14th hole for a 6 & 4 win. HKFC back to 1 up.

The fourth match had Matt Burke pairing up with Krzysztof Kostienko (aka KK) taking on FCC’s Henry Fung and Ilan Horowitz. A pivotal match in the grand scheme of the contest. Our pair started well enough going 2 up to then go down by the odd hole for most of the contest. Ilan started playing some gamesmanship by suggesting it was a 2-shot penalty from the drop zone to try to break the comeback, with KK carrying his opponent on the front half and Matt finding his rhythm on the back nine for long enough to eke out a hard fought halve. Match 2½ - ½ up, with 2 to play.

John Thompson and Tom Hayman were not to know that a win would bring the trophy home for a 7th year in a row against Joseph Chu and Robin Wong. FCC were not giving up without a fight and in what was another close encounter, fair play to the Journo’s who played very well to get a point on the board for FCC to keep them alive with a victory 2 & 1 – therefore closing the gap to 2½ - 1½, with just the last flight to play out.

I had put out a strong anchor pairing in the knowledge that it could well be the decider. Will Glover and Justin Faulkner both not new to the big match atmosphere and working well under pressure up against another decent pairing of Qing Feng and Roger Choi. Nip and tuck all the way in what was a cracker. As they say, save the best ‘til the last! So, it all went down to the final green with us just about pulling through 1 up. Fabulous drama and all played in the best spirit. A very close overall result - HKFC winning 3½ - 2½.

So, an even sweeter victory given a nail-biting finish and an excellent start to 2021 to keep the unbeaten 2020 run going for our talented Golf Society Team. We look forward to defending it hopefully back in Macau early 2022.

FCC are making this fixture more competitive, but if they could just get all 12 players out, who knows the result. For now, this trophy remains in our cabinet. Hands off Lawn Bowls!

Lastly, some stayed on at the clubhouse and then went on into Sai Kung town for a few fizzy beverages, others zipped back to The Sportsman’s for liquid refreshments. After all, each victory is more than a reason to celebrate!