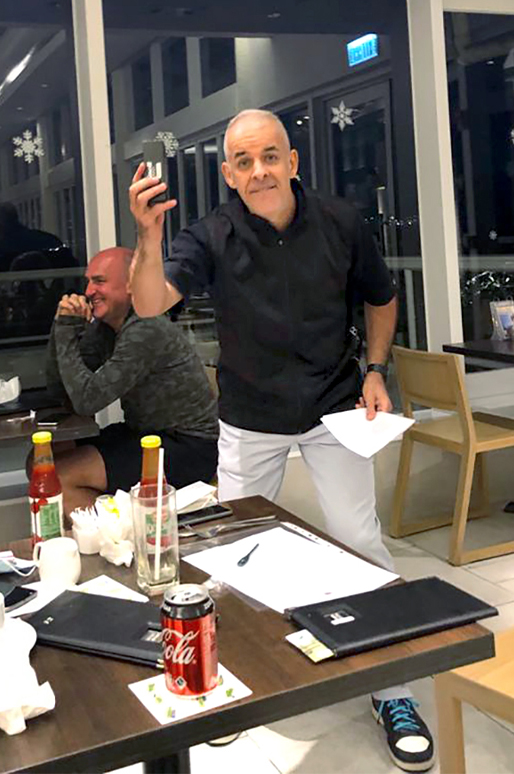 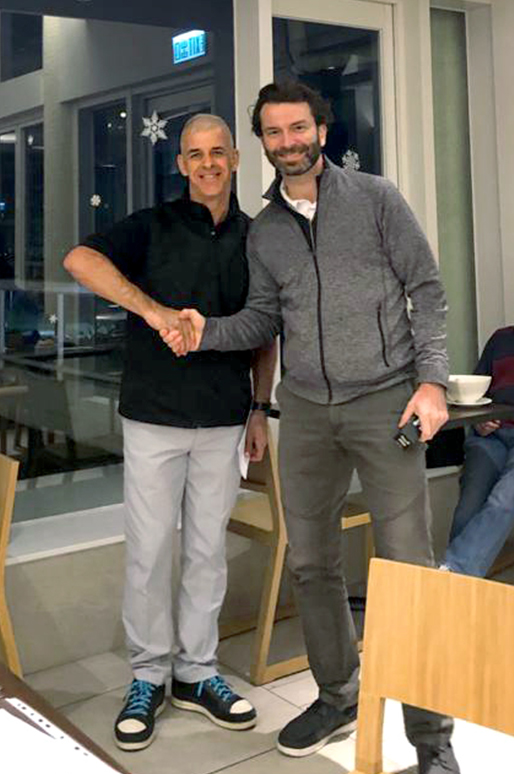 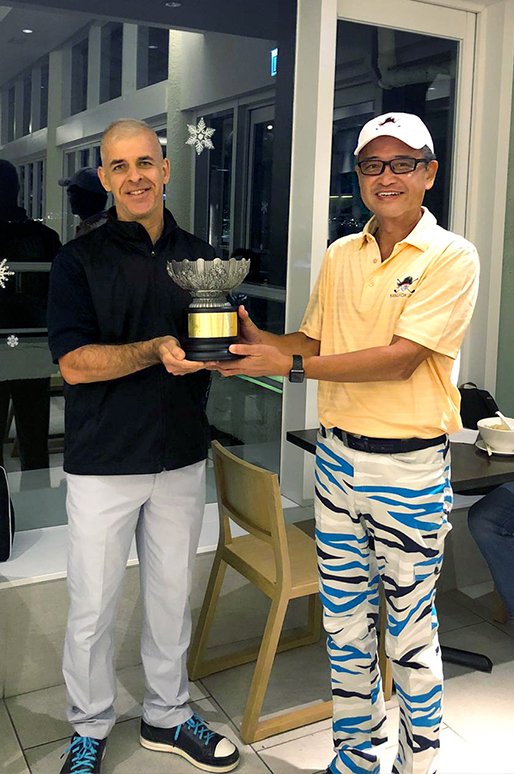 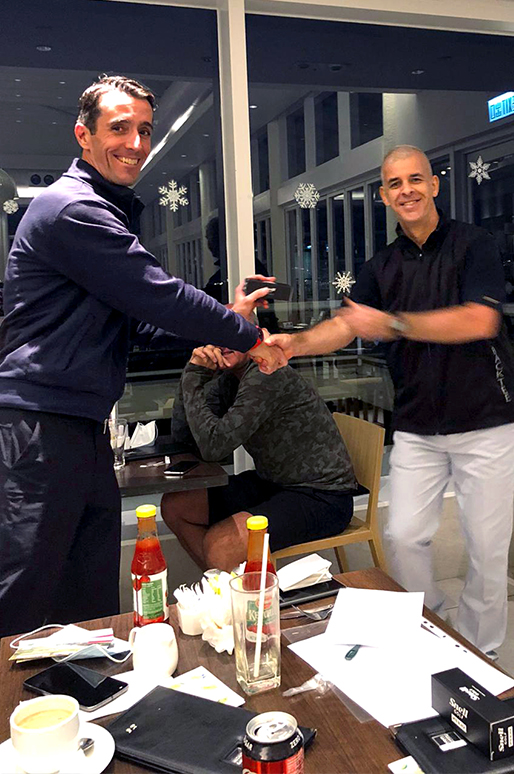 This new fixture against MiB was only our 5th match in a heavily COVID-interrupted year, although much anticipated. It was originally scheduled for February, then April, before a late July postponement. So, to get it played “fourth time lucky” and in such glorious weather with firm/fast greens, was a win in itself!

MiB threw down this challenge in late-2019 and we were up for it! MiB stands for “Men in Bush” (no, not “Men in Black”), a golf society comprised mainly of Hedge Fund related executives (get the pun??); many of whom also have connections with HKFC and Mission Hills GC, and they tour together annually.

Eric Desgouttes and our smooth-swinging debutant Oli Guest were first onto the 10th tee (our first), to finally get the action underway. They were up against Paul and Amy Walters and with both teams gathered around the tee box, one could feel the nerves akin to the start of a Ryder Cup! Amidst some ‘oohs and ‘arghs, all players seemingly undaunted as they strode off down the fairway. Fortunately, our boys “ham and egged” that bit better, closing it out 5 and 4. HKFC 1 up.

Stalwarts Jonny Brock and our soon-to-depart-to-Helsinki Warren Weener both smashed their drives knowing their opponents Colin Lunn and Alex Doyle could also crack a decent ball. The banter was on parade long before the action, in I’m sure what proved to be a very social grouping. Some good golf was played throughout, with our pair getting better as the day wore on, recording a solid win 4 and 3. HKFC 2 up.

Andrew Wood and Nick Allen have a tidy record as a pair going back some years, so were looking to maintain that streak against fellow Captain Taylor Hui and his junior hotshot Harry Hui. Andrew and Taylor both topped their drives into the bush (literally both “Men in Bush”!), perhaps succumbing to the pressures of Captaincy! Punches were traded over the first few holes, before young Harry’s putting started to wobble with Andrew making a few clutch putts. This resulted in us taking a good lead around the turn. Unfortunately for the Hui’s, they could not claw back, leading to a 5 and 4 win for the more experienced pair. HKFC now leading 3 up, what could go wrong!

The fourth match-up had ‘squashies’ Chris Burley and another debutant Krzysztof Kostienko take on their Tim Chillington and Phil Elliott. Could MiB produce the “Miracle at Medinah”, with a rousing comeback in the last three flights? Well, it was a story of Chris the steady Eddie and “KK” more zig-zag both making positive contributions - with “KK” often seemingly out of the hole, only to finish big. Would this be enough to carry our pair to victory? Well, the answer was no, but an All Square was all we needed - well done fellas! Match over, now 3 ½ - ½ up, with just 2 to play.

Ali Murray and Bill King were not to know the result and as it happened, their Co-Captain Alain Roberge and Jeremy Lam played very well to get a point on the board for MiB, 3 and 2 – therefore closing the gap to 3 ½ - 1 ½ up, with just the last flight to play out.

Another pair of ‘squashies’ TK Yeung and Kien Ng were up against a strong pairing of big- hitting Olivier Haxaire and Simon Humphries, with us again going down 3 and 2, ensuring a very close overall result - HKFC winning 3 ½ - 2 ½.

The inaugural 2047 Challenge Cup therefore being added to our burgeoning trophy cabinet in what was an unbeaten year for our talented Golf Society. We look forward to defending it probably north of the border sometime in 2021.

Last but not least, a big thank you to Warren Weener for your efforts and contributions to our Golf Society over the years. It was a pleasure to play with you and we all wish you and your family the very best of luck in your new ventures soon in Finland! (enjoy the saunas...).