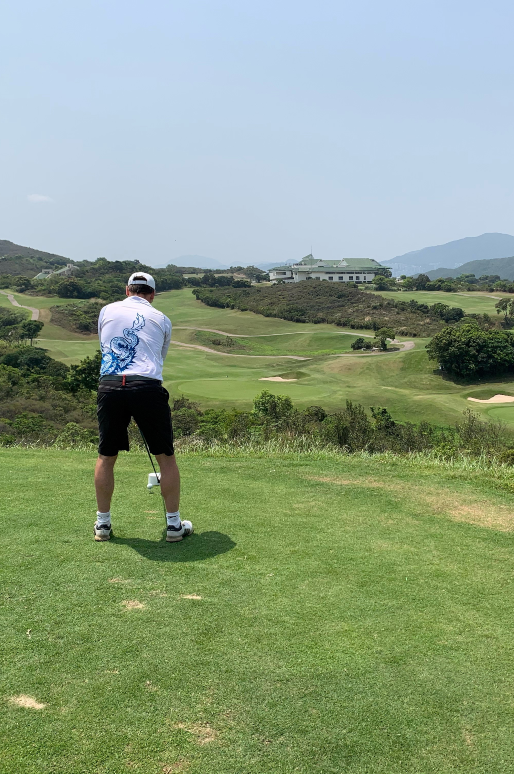 Cancelled last year due to the pandemic, this match was eagerly awaited by both sides. This has been an annual fixture since 2014 (although 2017 was cancelled due to weather problems) and a match we have never lost - no pressure there then! Normally held in Macau, for the second time running, we were back at Kau Sai Chau and the tricky East Course. A nice sunny day greeting us in Sai Kung, with a steady breeze to test our target golf.

Stalwarts JP Cuvelier and Bill King were first out for HKFC. Bill being the low handicapper, giving shots to RHKYC regulars Jeff Chau and Simon Wong. Unfortunately, Patrick Sherriff, their Captain, had to pull out of this flight due to a tennis wrist injury that hadn’t healed in time. JP had been in excellent form recently with a hole-in-one on the South Course at the 11th hole and a win in a LSW event three days prior. He was hot again, the putter continuing to fire right through to the 12th hole, with Bill in support. Our pair were simply too good, closing out a 6 & 5 win. HKFC 1 up.

Jenny Chapman and Helen Hayward were next up against RHKYC’s stand-in Captain Chris Li and Ruby Lim. Ruby is a golf pro and only brought in when The Kellett Golf Society fear the opposition, so a big compliment to us! It was always going to be tight and our pair being 2 down on the 15th hole, the golfing gods were needed. The 17th hole has a history of drama (more on that later) and this time in ours, as the match was clawed back to all square with one to go. With wind in our sails, our Ladies managed to close out the match on the 18th green. HKFC 2 up.

Andrew Wood and Scott Laws had never played together and were giving away lots of shots to Patrick Pender and Stefen Fischer. After the RHKYC pair asking about the match rules on the 1st tee, we knew this was going to be a long day. Patrick also saying he was a Senior, so should play off the Yellow tees and have 2 shots a hole, nice try but on we go chaps. Our pair never hit the heights, but made steady progress on the outward holes. The Yachties were really struggling off the tee and without some escape acts, could have been out of it very early. They made a couple of putts soon thereafter, but the holes ran out on the 15th, where Andrew’s par was enough for a 5 & 3 win. HKFC 3 up. The match over but drama surfaced on the 17th when Stefen accidently duck hooked his 2nd shot 3-wood at worm height from 70 yards away sending a German missile into Andrew’s left ankle!! Put on his backside and stunned, no more golf for the day and time for ice with a golf ball sized bruise.

Our Team Aussie of with Darren McEntee and Justin Faulkner next up against Benjamin Yip and David Lee. Seemingly cruising at 4 up on the back 9, a credible comeback saw their opponents claim a decent half point. However, that was enough for us to win the match!  HKFC 3 ½ RHKYC ½.

Mike Button and Alastair Murray were not to know that the match was won and that we would be bring The Champions Trophy home for a 6th year in a row against Andrew Wong  and Eugene Lee. RHKYC were not giving up without a fight and in what was another close encounter, fair play to the sailors who played very well but alas not to get a point on the board, going down on the last hole. Mike has a habit of leaving it late, whilst Ali is usually late! So, another victory for the good guys and another 1 up, with just the last flight to play out. HKFC 4 ½ RHKYC ½.

I had put out a strong anchor pairing in the knowledge that it could well be the decider. Jonny Brock and newbie Rich Maton both received shots. Could they work well under pressure against another decent pairing of the beautifully named Max von Poelnitz (not the bad guy from The Bond Movies and plays off 4!) and Stefan Kracht. I told they had a wonderfully enjoyable match with their RHKYC opponents, Max hits his hybrid further than most people can smash their drivers, and Stefan, who showed he had fate firmly on his side, with two outrageous bounce-outs from the bushes on the 1st hole alone. That, however, couldn't stop our pair from storming into a 4 hole lead at the turn. But fate was about to rear its head once more. On the 12th, Stefan's tee-shot disappeared into a grave, only for the ball to bounce 50 yards out into the middle of the fairway and a mere 20 yards short of the green. On the next, Rich's tee-shot, was only marginally to the left of the green, but somehow landed on a sprinkler head and flew into the ocean. Nevertheless, our pair managed to get it back to 2 up with 3 to play. Surely a banker? Especially when Stefan's 3rd on the par 5 16th flew high and right into the wasteland only to bounce back at right angles to within 10 feet of the pin! Back to 1 up. The 17th was halved, and so it all came down to the final hole. Would Fate show its hand once more? This time Stefan didn't need such help, as he played the very tricky hole like a pro, just missing out on a birdie/nett eagle. So, it all came down to Jonny, who had nearly holed his 3rd, only for it to spin 10 feet passed. Could he sink his birdie putt for a win? Fearing a lightning bolt if he did, he just failed to hit his putt hard enough to see it fade right at the last moment. Nip and tuck all the way with the match halved and big smiles all around whilst saving the best ‘til last! A wonderful and memorable day for all. HKFC winning 5 - 1.

With two matches All Square and another two matches 1 up wins to those from Sports Road, the overall result was much closer than the score line suggests. So, two wins to start 2021, well done Football Club. We look forward to defending it hopefully back in Macau early 2022.

Fun was had at the 19th hole. Special thanks to both Patrick Sherriff and Chris Li who also kindly provided most of the photographs.