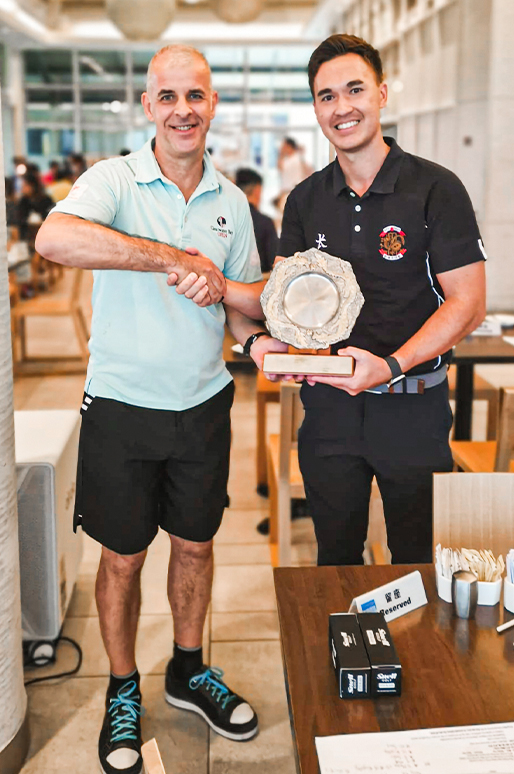 The Dragon Golf Challenge is an annual fixture first played in 2003 and over the years, has been played over different courses in Hong Kong, Macau and China. It was unfortunately not played last year due to the pandemic, so this “local derby” was even more eagerly anticipated than normal.

The cricketers won this match in close contests in both 2018 and 2019, so we were staring down the barrel at a hat-trick of defeats this year. If we could win, that would make it 7 wins each, plus 4 draws (note: this fixture was not played every year). So, plenty to play for either way. Our intel was working, we had a sighting of some of their team practicing on the East Course just 5 days before game day. A few withdrawals meant some new faces on either team, giving this historical fixture plenty of freshness. Apart from a couple of flights, neither side giving or receiving too many shots from each other, with high/low pairings being the order of the day.

Fortunately, the ‘soft’ T3 signal had come down to a T1 overnight, so we were good to go. Normal traffic into Sai Kung meant that some of us arrived earlier than expected, allowing for a full monty breakfast and plenty of valuable preparation time on the range. The August slot and the tail of the typhoon meant it was our most humid Dragon Golf Challenge, albeit with a steady breeze offering some consolation. Given lots of recent rain, local ruling of lift, clean and place on the fairways was agreed by both Captains.

Our lead pair of Phil Head and Kien Ng were taking on their Captain & ex-golf professional Kingsley Kelly & Kenny Wong. Playing against a Plus 1 golfer, Phil & Kien knew they had little room for error. A few early mistakes by HKFC were clawed back to 1 down after 13 holes. Our Chairman then won the 14th & 16th holes, with an up & down half on the 15th hole, for our pair to take a slender lead 1 up. Kien chipped to within 4 feet on the 17th hole, but Phil was not to be usurped by sinking his 10 foot putt for the win (sneaky), a fighting 2&1 victory.

That was followed by a 2&1 defeat by our Captain Andrew Wood and Marco Jorge. Americans Eric Selner & Neal Goldman could both clearly play being 10 handicappers, but Eric’s drive and 4-iron into the 1st green (Par 5) to win the hole with an easy birdie, was a stark warning to the HKFC pair. The front 9 holes was a grind to hang onto their coat tails, but a decent back 9 holes by the Sports Road pair took the game to the 17th hole, where the match concluded. Between our opponents they had 5 birdies and Eric, who was playing the East course for the first time, was gross 1 over for the round. A really good and high quality match.

Bill King partnered Taylor Hui in their match against Jeremy Platts & Matt Davies. Taylor started very well and the HKFC pair took the lead. Unfortunately, Bill’s dreaded shanks returned at just the wrong moment, which like a virus was transmitted to Taylor. So, within a blink of an eye, a lead turned to a deficit, with the 17th hole again proving decisive in this 2&1 loss.

Our next pairing of Tom McColl and JP Cuvelier looked a good bet on paper to bring home a point to square the match against John Briscoe & Ryan Voon. Clearly the HKFC pair were living upto their billing as they raced to Dormie 6. Then a slight wobble with the finishing line in sight, but not to be outdone closing out the match 5&3. Overall match position now 2-2.  HKFC still needed at least 1 ½ points from the last two flights to bring the trophy back to Happy Valley for the first time in 4 years. Game on.

Jonny Brock and Justin Faulkner were feeling confident in their match against Tim Mann & Tim Chillington. Word out at the 19th hole was that the ‘Two Tim’s’ were often seen in the drop zones, so hopes were high for HKFC to regain the lead. Clearly this ‘intelligence’ provided misplaced confidence, as it was looking all rather serious on the 18th green. Following Jonny’s opening hole birdie, our pair had missed a few 15-20 foot putts, so Justin’s 20 footer for a closing birdie to win the match was no guarantee. That said, this Aussie is a real fighter and not for the first time this year, proved what a great clutch putter he is by nonchalantly knocking it into the cup for a narrow but sweet 1 up victory. Now 3-2 overall.

The anchor and pivotal match brought together the old and the young in Terry Wright and debutant Harry Hui, both single figure handicappers. The former a rugby legend and the latter a 14-year old HKGA National Junior Development Player with a big potential. Probably slightly nervous and not having played the course much, young Harry lost balls on the first couple of holes. It was a slow start for the HKFC pair. So slow that Harry was more interested in texting his friends ahead of a farewell party for schoolmates later on! Around the turn, Terry started to click as a birdie fest arrived, although it was Harry who parred the 17th hole to finish off the match 2&1 to the good guys! HKFC winning the contest 4-2.

Most stayed on for a cheeky beer and a bite in the clubhouse, with Kien puffing away on his cigar following what was ‘a good day at the office’. It was great to see the cricketers again, always a close and fun match - and weren’t we lucky with the weather, because as soon as we were done, the hooter went to close the course due to thunderstorms and lightning.

The quite beautiful Dragon Golf Challenge Shield then returned to Sports Road where the champagne flowed and we look forward to defending it against our old enemies next year, it’s 19th Anniversary.