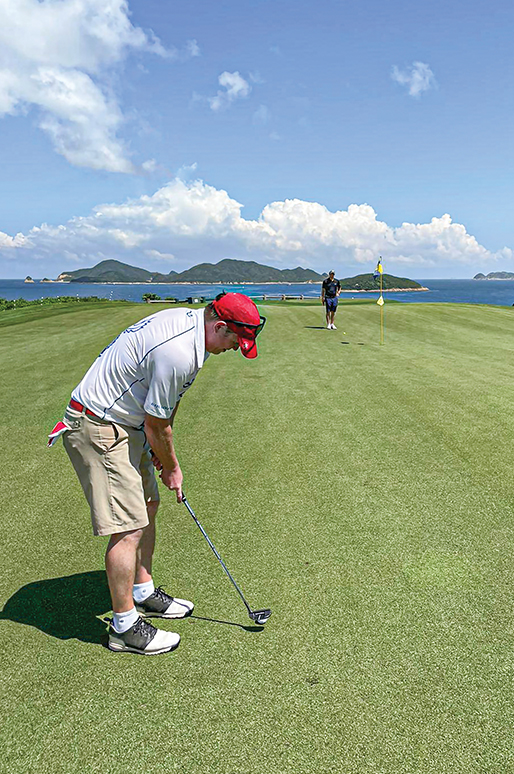 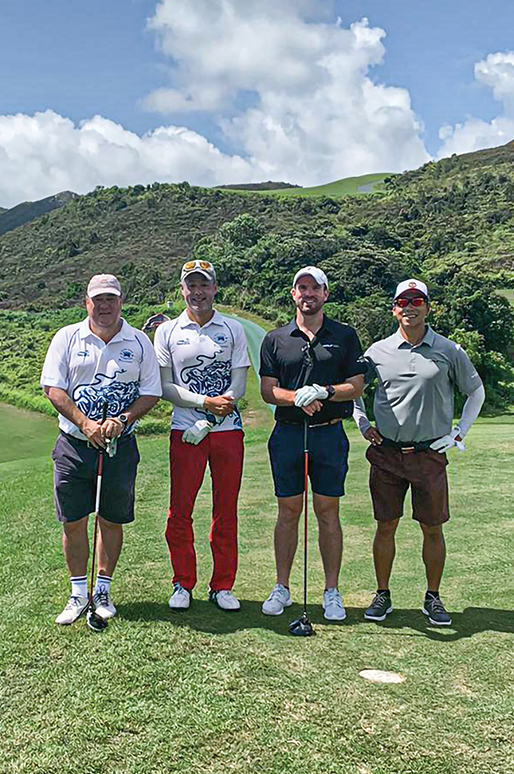 The Ryder Bowl is an annual fixture first played in 2003 and is usually played over a weekend at Lotus Hill Golf Resort in Panyu. Given the quarantine restrictions on both sides of the border and the scarcity of local golf course bookings, both Captains agreed to play the fixture again this year on a single day in Hong Kong at Kai Sai Chau GC.

The Americans got a good pasting last year and were staring down the barrel at a hat-trick of defeats this year. If we could win, that would make it 9 wins each, plus 1 draw. So, plenty to play for either way. Our intel was working, we saw 4 of their team practicing on the East Course just 2 days before game day. A few withdrawals meant some new faces on either team, giving this historical fixture some freshness. Nether side giving or receiving too many shots from each other, with high/low pairings being the order of the day.

Fortunately, no heavy traffic into Sai Kung meant that some of us arrived earlier than expected, allowing for a hearty breakfast and plenty of valuable preparation time on the range. The July slot meant it was our hottest Ryder Bowl, but with a steady breeze and 66% humidity, plus lots of recent rain, these were good conditions for low scores. How hot would our golf be though?

Our lead pairing of Jason and Malou Waldie were up against their Captain Nick Lock & Andy Ho. Malou was pairing up versus these two again after losing 2 down last year, so revenge would be sweet. Her putting was very good and proved to be enough to swing a very tight affair, which again went to the 18th hole. Fortunately, this time, we won 1 up.

That was followed by a 3&2 victory by our Captain Andrew Wood and Marco Jorge. We were never down versus stalwarts Darian Yip & Richard Lo, having taken the lead on the 2nd hole. Andrew played well early on, mixed with the Americans missing 3 makeable putts to go 2 up after 4 holes. However, a comeback was never far away. Marco now in top gear but our opponents started making their putts and using their shots to swing the match from 4 to 2 down with 3 holes to play. A needed clutch putt of Richard’s skimmed the hole on the 16th, game over, with HKFC now 2 matches to the good.

Bill King and Graeme Brechin resplendent in new team kit, ham & egged to great effect in their match against Steven Lee & Sean Whipley. Graeme used his shots wisely, taking the tough Par 5 6th hole in his stride. Never really troubled, we could swing freely, making it a good day at the office with a 5&3 victory. Therefore, we were now 3 played and 3 up overall. The trophy retained and further glory well in sight.

Our next pairing of regulars Terry Wright and JP Cuvelier looked a good bet to bring it home against Nicholas Wong & Michael Elko. Terry got off to a real flyer (think rugby, no pun intended), with the team going 7 up after 7 holes, in his front 9 level par. Our American friends then plied our pair with welcome cold beers during the back 9, hoping to steal a march. While the deficit was reduced, a decent 4&3 win resulted in the silverware coming back to Sports Road for a third year in a row.

John Thompson and Helen Hayward were spotted all smiles on the 14th fairway in their match against Jonathan Chu & Henry Yu, although we couldn’t decipher by their hand signals if they were in fact 2 or 3 up at that point. Anycase, they did more than enough by winning 4&3, in what was now becoming a rout.

The anchor match brought together death golf specialists Justin Faulkner and Will Glover, who were up against Sam Gellman & Randall King (the latter a former Davis Cup tennis player). Will (also an ex-national junior Hockey player) was one of a few Englishmen in the team who had been up all night supporting ‘The Three Lions’ and was in such a good mood, celebrated their semi-final victory over Denmark with a fair few beers from the off. Sometimes it helps loosen the swing, sometimes it doesn’t. Fortunately, Will did well under the circumstances, but it was Justin’s clutch putt from 20 odd feet on the 14th that sealed victory 5&4 and an historical whitewash 6-0 overall!!

Everyone stayed on for a very social beer and a bite in the clubhouse, with the odd cigar for those inclined. Always good banter with our friends from Tai Tam and much bon homme.

The famous and rather large Ryder Bowl therefore remains in our burgeoning trophy cabinet for yet another year and we look forward to defending it against our old adversaries next year, it’s 20th Anniversary, hopefully back on the mainland in September/October as per usual.