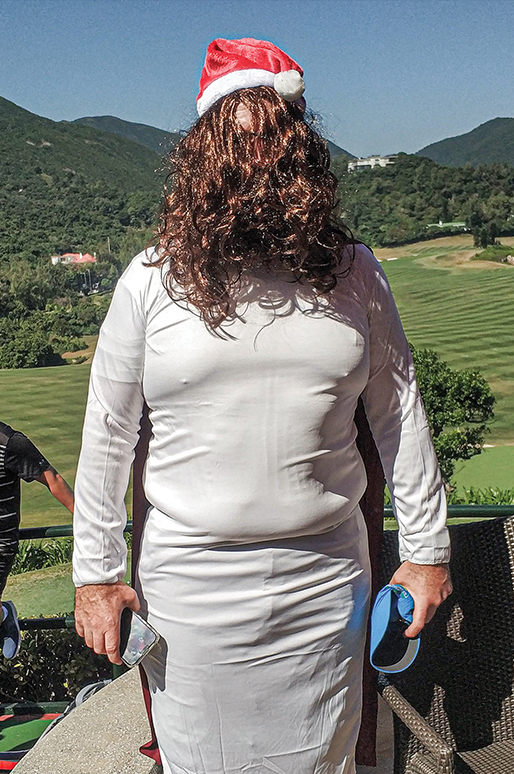 With the exclusive Shek O Golf Club celebrating its Centenary in 2021, along with the rather limited opportunities for our Society’s members to play golf during the Covid period, the Committee approved Jonny Brock’s original idea of investigating if we could hold our own golf day at Shek O, even though they demand rather a large sum of money for this, especially if the event is not a charitable one. But as our Society is in robust financial health at present, thanks to the sponsorship secured by the Committee - most notably down to the hard ‘work’ of Phil Head, Heather Deayton and Chris Meecham - it was agreed that a large subsidy could be afforded to make the cost more reasonable for our members.

However, this was still one of our pricier outings even after granting a half-price green fee of $1,100 per head, which, in itself, was half as much again as joining the Society for the whole of 2021 and is less than half of what it will cost to join HKFC GS in 2022 - sign up now if you haven’t already!

Hence, we were rather nervous about the level of interest. As it turned out though, almost as soon as the event was advertised, our booking computer beeped off its mountings and we had nearly 90 applications for the maximum of 72 places, in comparison to our normal quota of only 24 golfers at KSC. Concern then moved from a possible lack of interest, to “How can we get so many players around a very tight golf course without someone getting whacked by a golf ball?”. As a result, quite a few emails had to be sent in advance, with advice to get insured, especially prominent.

After much planning, we were finally ready for the off, but first we had to all get down there, with such a large field requiring two buses. After Chairman Phil’s warm-up routine of morning beers on the bigger bus was pre-advertised, all but three chose to squeeze aboard the larger option. As a result, we managed to get everyone there not only in good time, but also already well-steeped in the festive spirit and eager to devour the excellent sandwich starter, along with more beers from the kegs, whose taps had been opened early.

For many, this was their first visit to Shek O as it is undoubtedly Hong Kong’s most exclusive golf club, with no access unless invited by one of the 300 or so members. We were also blessed with a lovely November day with pleasant temperatures, low humidity and crystal blue skies, so everyone could enjoy their pre-round refreshments along with the spectacular vista from the clubhouse verandah.

Having the course to ourselves meant that we could tee-off at a very civilised 1pm using the “shotgun” format, where every fourball is assigned to one of the 18 holes, and then at the signal (sadly no shotguns anymore, but a very loud hooter instead), all players start simultaneously. Santa hats were distributed, along with the pre-printed scorecards, that our handicap secretary, JP Cuvelier, had spent the prior couple of days preparing by hand.

Most players had read the briefing notes and came dressed in seasonal colours. Although one player excelled himself, pushing the boundaries of local dress code to the limit, not merely appearing to all mankind as the Messiah, but then also teeing off in full kit too!

John Thompson later proved his own miraculous golfing ability by driving into the river that ran across the 14th, with a full-blooded splash, only to find that his ball had somehow ‘walked across the water’ to find itself sitting prettily upon a mount on the other side.

No more tales of Biblical proportions unfolded throughout the day. However, as this was primarily a social event, the main prizes on offer were for the Yellow Ball team competition, with each fourball handed a yellow ball, which they have to hit in turn for one hole in rotation, before passing it on to one of their team members, recording the score of that golfer, and then totting them all up at the end for the team tally, should they manage not to lose it. Whilst this is one of the most fun and fair team variations in golf, it also puts increasing pressure on the person hitting the yellow ball not to lose it, which escalates the further into the round the team gets. Several tales of people crumbling under the pressure at various stages in their rounds were regaled back in the bar, the results of which are described later.

The shotgun format also meant that everyone finished at about the same time, with the extra administrative pressure of ensuring that only the fittest were assigned to the holes further from the clubhouse. This is tougher than usual at Shek O as there are no carts permitted and even trolleys are not allowed, so bags need to be carried or caddies booked. Ah, the good old days!

Despite our worst fears, everyone managed to dodge the hail of golf balls crisscrossing the closely packed fairways to arrive somewhat weary but happily back at the beautiful clubhouse just as the sun began to set on our golfing efforts and the staff prepared for our F&B exertions to come.

With the scores totted up and the alcohol in full flow, it came to the prize-giving. First up, several fines had to be handed out and Tequila shots distributed accordingly to those who, despite claiming to be adult golfers, and not requesting any senior rates for dementia, proved incapable of filling out their booking forms and/or making their minds up as to what they wanted for the day.

With the warm-up out of the way, we could now move on to the ‘serious’ prizes - Best Dressed went, without a doubt, to our very own ‘Messiah’, Colin Lunn, ably supported by his radiantly coloured ‘Disciples’ of David Lindsay (shiniest shirt), Aiteina and Barry Mitchell (brightest jumpers).

They narrowly pipped the fourball or husbands, who had tied themselves up, knowing they were following in their beloved’s footsteps, with their wives ahead, taking the ladies’ prize for leading them on, dressed in their own resplendence.

As for the more ‘traditional’ prizes, the winner of the Individual Stableford was Niall Rowark on countback from Chris Burley, who both scored a very solid 41 points, ahead of JP who took the third place with 40. Best Gross went to Ryan Black on countback from Jonny, who both scored 75, as did 3 others - Matt Keefe, JP and Chris Burley. Considering this is 10 over par, it shows that Shek O, although being short, is certainly not a course to be trifled with (although their puddings were truly delicious!)

The hole prize for the longest putt went to Joe Jenkinson, whilst the nearest-the-pins went to Will Glover, Matt Keefe, Chris Burley, Anthony Ford, Jonny Brock, Elsa Lee and Aiteina Mitchell, who took two of them, both on the front 9, perhaps not surprisingly as he only scored 4 pts on the back nine, which just highlights both the highs and lows that golf can bring in the very same day.

Finally, we arrived well-lubricated and eager to know who had won the main prize of the day, the Yellow Ball team competition. As it turned out, just two of our eighteen fourball teams had managed to get their ball all the way round Shek O’s tight 18 holes, with several teams truly ‘excelling’ themselves in their efforts - the three teams skippered by Ryan Black, Henry Lai and JP losing theirs on the 3rd hole, Matty Burke’s quartet lost theirs on their 2nd; but no one could surpass Simon Hague’s foursome, who lost their ball on their very 1st hole! As a result, we felt compelled to award more Tequila shots to those individuals who had lost their team’s ball. However, their names will remain anonymous, as no doubt the trauma will remain with them for a while to come. However, their faces might be discernible in the group photo below!

With the fines and prize-giving concluded for the day, we still had plenty of time to enjoy a lot more lubrication on the wonderful back lawn whilst reflecting on the day’s magnificent proceedings.

Other than overseas tours in decades gone by, this was by far the biggest operation mounted by the HKFC Golf Society. For this, thanks go to all those who participated, Jonny for his tireless organizational efforts, various committee members for their additional support, our sponsors for making it financially possible, and of course to the staff and members of Shek O who allowed us to use their beautiful course and to look after us so royally. We hope to be allowed back in 2022, once the divots have settled and our brains and livers had time to recover as well.