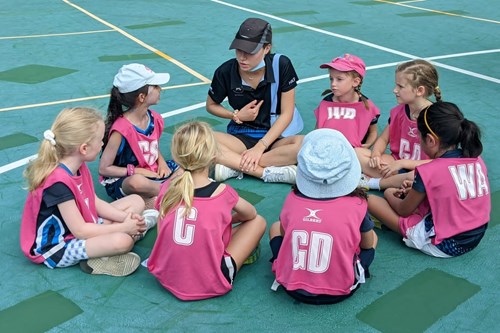 Snowies got out on court for the first time. Very exciting for our U8s as this is the first time there will be an U8 league in the HKNA Junior Netball League. 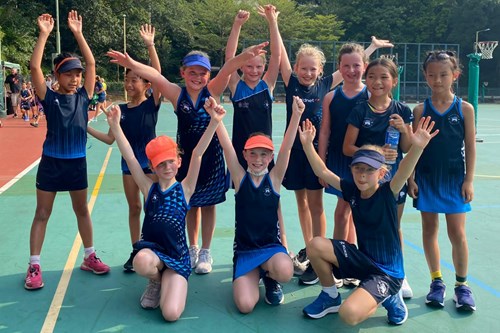 The U10 Snowflakes had an excellent start to the new netball season, taking part in the annual HKNA Netfest. Despite a team including some players new to netball and some challenging conditions, they were very competitive in the round robin section, playing three SK Stingrays teams and coming away with one victory to put them through to a play-off against the SKS Amber. With plenty of support from the sidelines, the Snowflakes came through against a team they had lost to in the round robin, with a 2-1 win to progress to the final. Here they fought well against a more experienced SKS team, with the circle defence doing particularly good work, and in the end only lost narrowly. All the girls had a great time and we can look forward to an exciting season ahead!

Huge thanks to coach Jessie who managed her Snowflakes coaching and her own playing responsibilities brilliantly - we appreciate it! 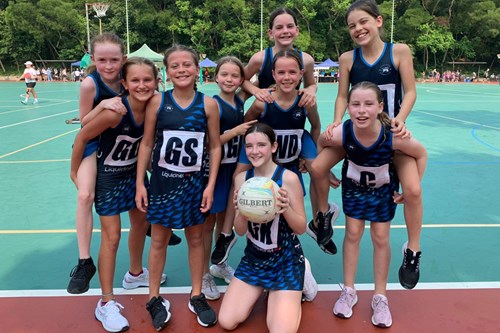 What a start to the Netball season for this team of enthusiastic girls! Despite the incredibly hot morning, their spirits were high. With some brilliant passing and shots going in from all over the circle, the team managed to win all their games and top the pool. Onto a tough semi-final against HKFC Snowstorms, they found themselves in the final against a strong Sandy Bay team. At 1-1 on the final whistle, a last-minute amazing goal under pressure saw the girls win the tournament - what a finish.

Every girl on the team should be proud of their performance and positive attitude throughout, and a big thank you to Hannah May for being a fabulous coach. 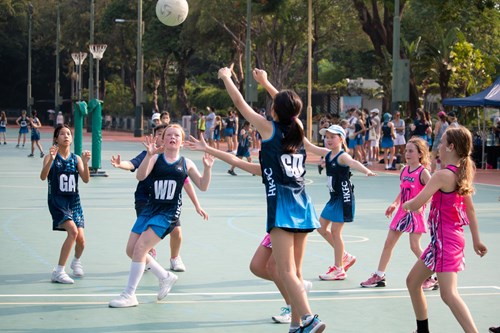 An impressive start to the season for returning and new players to Snowstorm at Netfest. The team played 3 fast-paced games in the blazing sunshine, taking them to the semi-finals. They made a strong start winning their first match against Sai Kung Stingrays 2-0, both goals scored by shooter Sophie Fennelly. It was a draw against Sonics Unicorns, with Willa Mundigian scoring for Snowstorm. A mature team from Sandy Bay defeated Snowstorm in the final round before Snowstorm went into a head to head in the semi-finals with HKFC Lightning, who went on to win in the finals.

A fantastic first outing for Snowstorm and the team showed enormous promise for the season ahead. 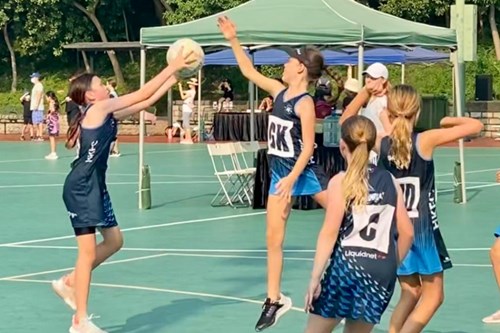 It was a scorcher, but the Blizzards stayed cool at Netfest over the weekend. Although most of the team was playing together for the first time, they looked like a well-oiled machine, moving off the ball and finding open space across the court. On the offensive side, passes were crisp, and a good number of shots found their way through the centre circle. On defence, the team did a superb job anticipating where their opponents were going to be, intercepting passes and pulling down rebounds with authority. With more hard work and practice, the Blizzards will be a force to be reckoned with for a long time to come.

The U14 Rainstorm team had a fantastic first tournament of the season last week at the Hong Kong Netfest competition.

The team had a gruelling schedule with 5 back-to-back matches. However the girls played very smartly, stayed on top of their hydration and won 4 of their 5 games and as a result got through to the playoffs.

They played their training teammates HKFC U14 Thunder in the semi-final. The girls played very strongly. However the HKFC Thunder team were on fire and won the game. By this point, the Rainstorm girls were feeling quite exhausted with 6 games under their belt, but still managed to pull together to take part in the playoffs for 3rd place where the Sai Kung Stingrays came out on top.

For a team that had just one practice together, there was a great sense of comradeship. The girls stayed positive throughout and were always looking out for each other on the court.

A special shout out to the Netfest organizers and coaches, many of whom were on the court from 8am in the morning to late in the evening with temperature reaching over 40 degrees at some point. 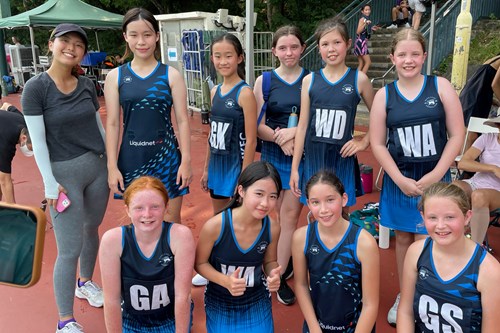 It was great to be back on the courts and the Tremors were full of excitement for their first match together. They soon found their rhythm, winning their second game against the Stingrays 10–0. The heavens then opened and the girls chose to play through the storm which showed great commitment to the game. It was a tough competition and the girls did incredibly well in the heat to play 5 games and finish 3rd in their pool, narrowly missing out on the semi-finals. It was a fun-filled day with lots of off-court giggles as the girls really enjoyed getting to know each other. 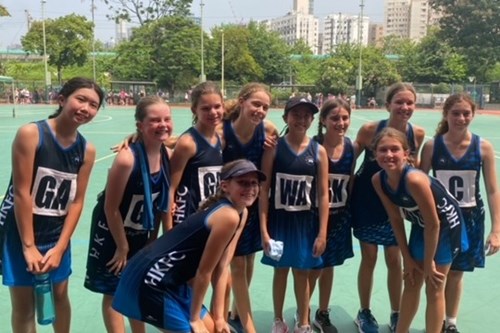 U14 Thunder started off their season in great style at Netfest, making it all the way to the final where they were just pipped to the post by Sandy Bay. Wonderful to see our young players starting off their year together, displaying excellent sportsmanship in their support of one another. Some of the goal scoring, especially against SK Stingrays, was extremely exciting and nailbiting-inducing, in what was possibly the hottest day of the year so far!

Here is a team that will go from strength to strength - well done to the Girls and their coach Rachel... also a big shout out to the supporters who came along to champion their efforts.

Netfest was full of anticipation and excitement for the girls in Red Rain. It was a boiling hot day, yet both old and new players all joined together to give 100% effort. They thoroughly enjoyed their new team’s first competition and are looking forward to the start of the new league season. Aqru was smiley and lovely and encouraged the girls to keep fighting. Thanks also to all the parents who came and supported. 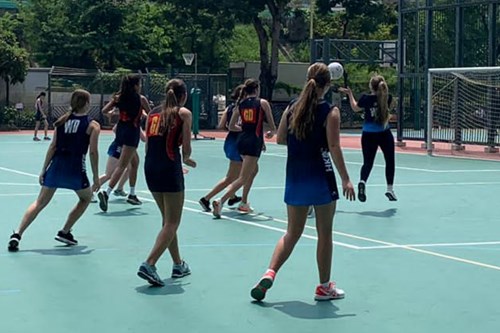 On the 17th September the Annual Netfest commenced with U16 Storm providing a very rewarding 2nd place in the entire division. The team consisted of ten players who all played superbly. In the first game, which was against the Stingrays’ second team, Storm were able to prevail with a commanding lead. The second game was against Sandy Bay, where again the Storm team had another strong lead. Through the next games, with some shaky starts but also some spectacular halves, Storm were in 1st place at the end of the playoffs. In the final playoffs, we played Stingray’s second team. Once again, though faced with difficulty, Storm won.

The finals provided confusion with the team firstly, being told they would play one more game, only to be told that they would not play again that they had won. Seconds after they celebrated, they were told that was wrong and they were playing Hong Kong Cricket Club and had to get on court right away. All this confusion proved a bit much. When the game started, Hong Kong Cricket Club took an early and commanding lead, which Storm were unfortunately not able to recover. So in the end, Storm took 2nd place. Whilst a win would have been amazing, the team were still very pleased with their start to the season. 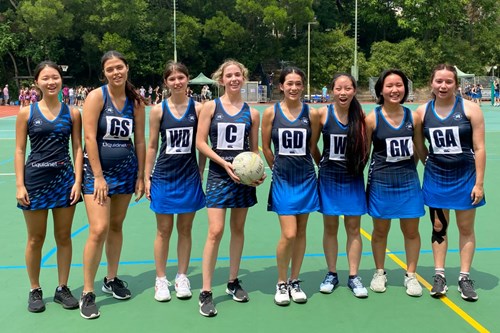 The new season started at the 2022 Netfest with a new team but with the same spirit and effort that we witnessed last year. Temperatures on court made the games very tough on all the players, but at least we were lucky to be on a court where there was a little shade. With some tough games against teams that have been playing together for longer, it was always going to be difficult. Scoring opportunities proved to be rare, but there were still moments when we could see what was to come once the girls started to find their teamwork and understanding. There was some resolute and determined defending and a lot of effort in midcourt to break up the play. Losses to experienced Twisters, Stingrays and Valley were hard-fought and had glimpses of what to expect later in the season. Most importantly, the team played with a smile on their face and in good spirit throughout. 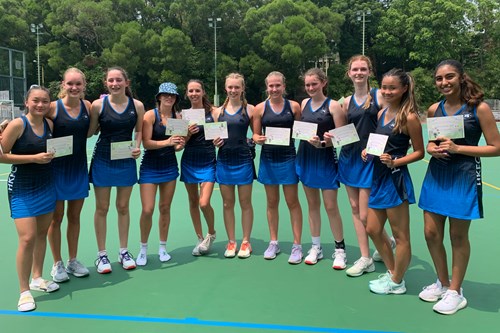 The HKFC Twisters had a great day at Netfest, clinching 1st place in the U19 Pool. Twisters started the day off strong, beating fellow HKFC team Mavericks. The team then went on to play a gripping game, drawing with the Sai Kung Stingrays 5-5. Midcourt players Elsie, Ruby, Jessie and Megan worked hard offensively and defensively through the court. Twisters played their strongest game of the day against Valley, defeating them 11-5. Shooters Grace, Hattie, Lily and Shaila connected with the midcourts effortlessly in the game, finding the rhythm that we’ll need during the season. Twisters advanced through to the Gold Medal match to play Sai King Stingrays once again. Defenders Beca, Bridie and Maia kept the pressure on their attacking side, turning over possession multiple times to increase our lead, achieving 1st place with a convincing final score of 9-2. It was a fun but hot 4 hours of netball. Well done ladies, a great preview of what our season will look like!