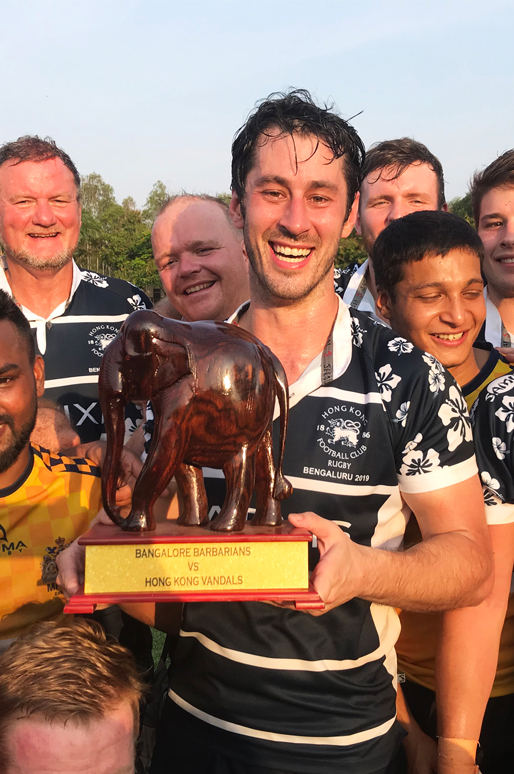 Hong Kong Football Club Vandals (the Rugby Section’s touring side) completed their end of season tour from 5th to 10th June, this year to Bengaluru in India. Originally the tour was going to be to Sri Lanka, but after the bombings there, and taking advice from the Hong Kong Rugby Union and the Section the decision was made to postpone the tour, hopefully only until 2020.

Our good friends, the Kolkata based Jungle Crows rugby team and their charity arm Khelo Rugby, stepped up and helped organise the tour at very short notice, thanks to Paul Walsh and Harinder Singh. But the biggest thanks go to Zaffar Khan, the Khelo Rugby main representative in Bengaluru, and now a lifelong friend to the Vandals. Also thanks to the Rugby Section (and indirectly the Section sponsors including Natixis), and the Vandals tourists themselves who were able to support two Puffins Rugby players from Sri Lanka to join the team in Bengaluru and participate in the whole tour, including charity events and the match against the Bengaluru Barbarians. Finally, and not least, thanks to those (HKFC Rugby Section Colts and Mini Rugby divisions, Gaz Wilde, Tara Barot and Seb Alfonsi) who donated items of rugby kit to distribute on tour, you can see many of the happy recipients in the photos. The Bengaluru Colts team subsequently played in a regional tournament in their HKFC kit, with one of their players selected for the representative team.
Arriving late evening to Bengaluru we were joined by Rahantha Abayakoon and Shahan Rodrigo from the Puffins at the airport and travelled to Area 83 outside Bangalore. We also met up with Nandalal Majhi from the Jungle Crows Kolkata who also toured and played for the Vandals. The following morning the Vandals tested themselves with various sporting challenges before heading to the Bethal Baptist School, a Khelo Rugby Kids initiative where the Vandals took 120 children and teenagers in various rugby linked sports drills and passed on all their coaching experience, followed by a welcome cup of tea with the headmaster and senior teachers.

Next stop was Hasiru Valley camp site, a regional park near Bengaluru. Of course a night trek was needed, which passed peacefully until the guides decided to set off large explosions, without warning, to let the wild elephants know some humans were passing.
Next morning a longer hike in daylight, followed by mud kabbadi – if you haven’t tried kabbadi it’s a popular sport in India, with some similarities to rugby.

Match day dawned, but before the Vandals could blow out the cobwebs on the pitch we were invited to coach, referee and coordinate a Khelo Rugby organised tag rugby tournament. Ten teams entered, and the donated kit that hadn’t been handed out at Bethal School was worn by many of the players. Kick off for the senior match was at 3pm, and the Vandals warmed up in the heat, careful not to use up all their energy prior to the first whistle. The match itself was played in great conditions and to a high standard, refereed with light touches by a member of the undead from the Vandals ranks. The Vandals ran out the winners in a tight game with some big hits and long distance tries by both teams 38 to 17. Tries by Nanda Majhi, Ben MacCarthy (2), Andy McEvoy, Damon Sze and Jacob Huang. Four conversions to Niall Rowark. The joint evening out that followed, allowed both teams to educate each other in an exchange of cultures, rugby fraternity and songcraft.

A great tour, and any Rugby Section Members reading this report make sure you book a few days off work for May 2020 now.