U11 playing in the U10 year group, went with 1 team and in the hope of coming home with the Cup. Not an easy feat I can say but one that we believed in, improving on Bowl runners-up in May at TRC.

Saturday arrived and the morning looked promising, blue sky and not too hot. The boy’s first game was a win against the Titans Assassins which was a very easy start (32-0). 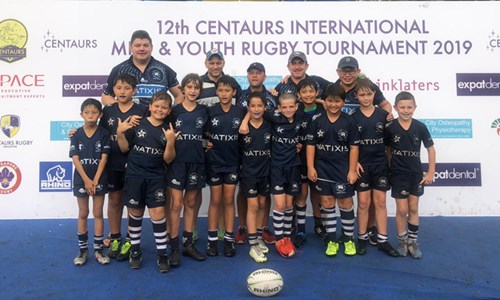 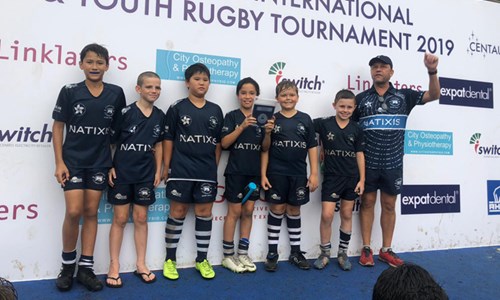 Now this gave the boys the impression the Cup was coming home and to be honest a false impression. There were still 2 more games in the pool groups and a win in each would secure the cup pool on the Sunday.

Next, the Saints (Singapore), very big lads and without tackles from Kobe and Sean it could have turned the other way. A settling period ensued, and the game then started to unfold in the FC way. Some fine driving by the forwards, Maximilian, Kai and Matthew with George passing out wide to Sean, then Justin and Kobe to finish the Saints off (28-0). The final pool game saw a very different FC team and one that they will surely remember against the SCC Black (Singapore) with a very good reputation in being strong, and well managed. And did they perform …. SCC did and with a routing that saw the FC boys demoted to the Bowl. A 6-point deficit in the tables to Sandy Bay saw them finish 5th in the 12 teams and into the Bowl semi.

Sunday, now a different day and the semi-finals for the Bowl. Up against the Australian Team, West Scarborough. An entertaining game and well fought. West Scarborough hitting hard and the play was tight in all areas. A slight slip up and we are 5 points down. Regroup and off we go again every chance to get it over the line but the defence from the Australian lads is immense and they manage to pull off the win: 10-0. Another loss and now in the Shield Final.

OK time to come home with something, Final of the day and the Shield, against the TRC of Singapore.

After some encouraging words by Coach Robin and some hard-hitting moral boosts off they went to battle and with the aim to come home with something in their hands. A different team on the pitch, wow now did they play well …. oh yes they did. Taking every single play to the limit. The forwards Kai, Ryusuke, Maximilian, Casper, Zach and Matthew all in turn hitting hard and driving through the middle. The backs Justin, Kobe, George, Mitchell, Adrian and Sean all doing exactly as needed and passing the ball wide. Justin taking the first try followed by Adrian and then the forwards Kai pushing over the line and the last one from Kobe.

The Shield is coming home. Not the Cup agreed but, in the end, they learnt a valuable lesson in playing as a team and delivering a fine finish where they can all be very happy.

A big thanks to the coaches: Sias, Dave and Duncan and the Parents as well.