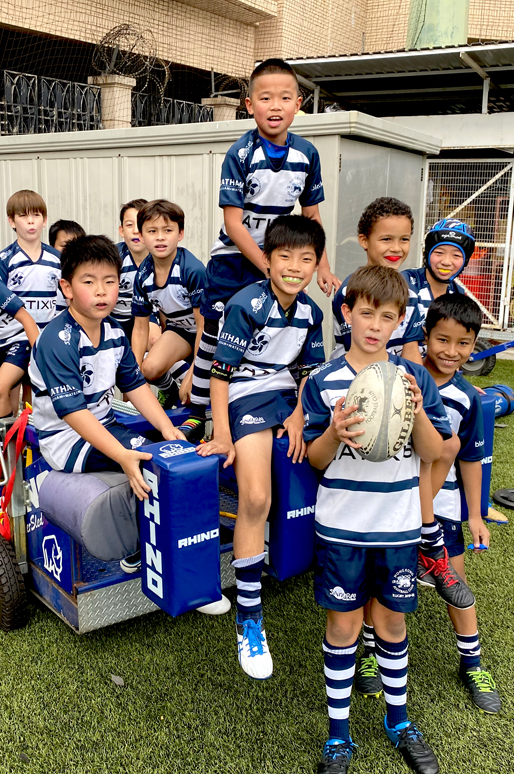 As the first tournament after the Christmas and New Year break, the boys were energized and extremely keen to hit the pitch. In fact, all 14 boys(!) ran onto the pitch confusing the referee and definitely intimidating the other team. After reigning in all the excitement, FC3 faced a physically bigger, stronger and well-coordinated Sandy Bay team. After many big tackles, Isaac Seah managed to push through solid defence for FC3’s only try (1-4). Battered, with their jerseys and faces blackened by the pitch, the boys were fired-up to redeem themselves for their next match, against Shatin Sha Pei (SSP). The match was closely contested, filled with solid tackling by SSP to steal the ball twice at the FC3 try line. FC3 improved on their shortfalls from the previous match by supporting each other and passing to all players to create the opportunity and gaps that allowed four players, Chun Hin Cheung, Isaac Seah, Efe Demiral and Karl Yeung to score tries to win the match (4-3).

The last two matches were lost against two very strong and agile teams, Valley Fort (1-4) and Flying Kukris (1-5) and presented a great opportunity to raise the skill set of the boys as a team. FC3’s level of aggression and teamwork in the rucks and coordination with the passing was a spectacle to watch from the sidelines. The perseverance or possibly the high-candy diet of a few boys were impressive, as they insisted to continue to play after being knocked hard in the head and chests and taken off.

Special mentions go to 3 boys that stepped-up match after match to play outside their comfort zone – Matthew Phillipson, Alvin Ngai and Nathan Kay.