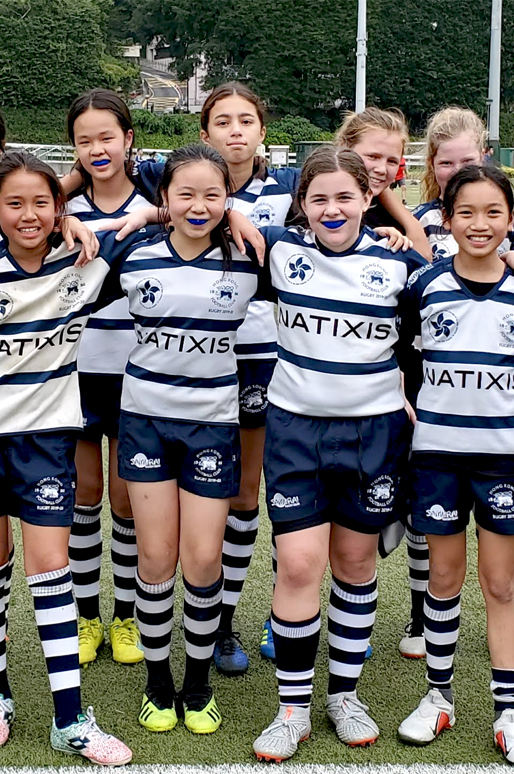 A solid performance by our U12 FC1 girls in the fourth round of the Kim Lam Tournament at Happy Valley Sports Ground on 19th January 2020. FC1 had a solid schedule against the top-tier teams in Hong Kong: Valley Fort, DB Pirates, HKU and Sai Kung. Starting with a tough match against a renewed Valley, Club struck first with a quick pass from our scrum-half, Brigid Warde out to the winger, Alyssa Schoonmaker for a try. Solid defence by our forwards, led by hooker Saidhb Martin and supported by prop Lucy Guest, held Valley to the draw until Valley squeaked past, a break-away run late in the match, and we ended up conceding the match 1-2 in a heartbreaker. Next, FC1 went up against the DBP BABAs team, with some big Pirate forwards. However strong tackling by Lauren Lau and Mia Wong neutralized their big runners. Great ball work by our #8 Vincy Chan with a bruising run up the middle, cemented the win 3-0. The next match was against Sandy Bay, the previous tournament champs. Despite strong defence put up by inside centre, Kelli Kong and outside centre, Sophia Li, the Sandy Bay offence was too big and strong, and our FC1 girls ended up losing 0-3. The final match was against Sai Kung Stingrays, a new entrant into the Div1. We set the tone early with a smashing run up the right wing by Vincy Chan. This was then followed with a beautifully executed series of passes from the back of the scrum to Hannah Gibbs to Lucy Guest to Alyssa Mok for a try on the left wing. Tempers on the Sai Kung side were running high, as our FC1 girls continued to dominate the match, winning 4-0 at the final hooter. FC1 finished the day with a 2-2-0 record coming 3rd in the Div1 Pool. A far better performance than the record shows, with a great progression of skills over the previous rounds of the KLT. Great jobs girls!