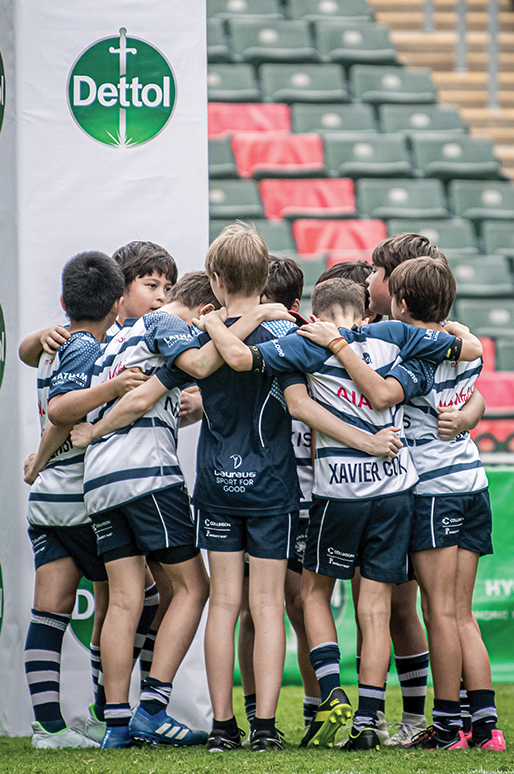 It’s not just international 7s players and rowdy fans from all over the world who have been missing out due to no Hong Kong 7s for the last few years. The mini rugby players of Hong Kong have been unable to take part in the time-honoured tradition of playing on the hallowed turf of HK Stadium in front of family and friends (and rowdy fans), a memory that sticks with the kids for a lifetime.

So, when the opportunity arose for a club day against Valley in the stadium, getting Mini Rugby on the ground was a must. Of course, in the current world we live in, nothing is as easy as you hope, and there were time and number limits for the day due to current government restrictions. Undeterred HKFC Mini Rugby and Valley Fort worked together to give as many kids as possible the chance to grace the field.

They set up two fields at the North and South end of the stadium getting games of 7s on for 7 minutes at a time. All up there were 16 games played across the U10, U11 and U12s (boys and girls). This allowed over 300 kids to get the opportunity to play, and the excitement was palpable from the outset. In amongst the organised chaos was some fantastic rugby, lots of smiles and tries a plenty. A huge thank you to all the kids, parents and coaches that took part in the day, and a special mention to Denis Brock who went above and beyond in the organising of the event in conjunction with the HKRU and Valley Fort.

The last game of the showcase was HKFC’s A team versus Valley’s A team. The boys started off strongly and scored a couple of early tries through Andrew MacQuhae and Noa Lane. With a lead, the boys had the confidence to play some expansive, running rugby. Long pass from Xavier Cox released Ben Luvisotto to score in the corner. Then Andrew MacQuhae and James McSheaffrey had a couple of pieces of great interplay with James scoring two tries – in between these tries Leon Lane darted over to ensure he matched his twin’s scoring tally. A comprehensive 6-0 win.

The B team got off to a strong start camped in the Valley half. From a well won ruck, Sam Lawrenson passed to Michael Saunders who, with straight, strong running through the last third of the pitch, scored the opening try. 1-0 Club.

The C team came up against a Valley team with an embarrassment of substitutes, who selected two of their biggest to join the game to try to save the match. Unfortunately, their tactical substitutions worked and they managed to salvage the game with two late tries. Final score Club 1-2 Valley. Despite the loss, the Cs, as always, showed great team spirit and commitment.

U11s were fortunate to have four teams playing at the stadium: Won 1, Draw 2, Lost 1.

Our beginners squad, led by Coach Vinay Sirinivas, put in a passionate performance. Although losing 4-1, new players Shun Matsuda and Rihito Shinde played not only their first game at the Stadium, but it was also among their first ever games of competitive rugby. The team benefited, as ever, by probing runs from Anish Fujibayashi.

The team coached by Nick Grenham secured the most convincing win, defeating Valley 7-0. Lucian Grenham and Robbie Guy Ramsay both scored two tries each and Tomas La Fontaine, a new arrival to U11, proved a tough task for Valley to handle.

The team coached by Karl Holden were leading 2-1 into the final phase. But, an unlucky break saw Valley steal the draw 2-2. Luke Holden continues to strengthen as a feisty nine and there were charging runs up the middle by Ned Lamont and Andre Chan.

Our first team played a knife-edge game with Valley. Both teams pushed the try line throughout the game yet neither team were able to score. The team coached by Mark England featured more strong performances by twins Genraku and Taraku Kinoshita, plus the one remaining girl playing with U11s, Naomi Chan.

All our U11 players experienced a great day. Our thanks to Chairman Denis and the many volunteers who made it happen, plus our Valley friendsand rivals. We love playing them, and winning some, losing others, is great for our rugby skills.

The 2021-22 season started off with a bang for the U10 and U9 girls with the Exhibition Matches at the Stadium. In the first contest with Valley Fort, our intrepid U10 girls proved to be more than a match for the girls from Valley. Impressive runs by Amika Potgieter with assists by Danielle Leung led to a 3-0 victory over Valley. Hard tackling by Lauren Loo and great fullbac defence by Claudia Ashby Sanchez effectively shut down Valley's attack. The Club’s U10G girls were exuberant after their victory ahead of the Senior Women's and Men's matches. Great job U10G girls!

A triumphant inaugural performance by the U9 girls’ squad at the Stadium resulted in a 5-tries-to-1 win against Valley Fort. Tremendous scores by Aster Greenwood, Abbie Fulton, Chloe Fulton and Molly Morson put HKFC well ahead in a brilliantly fought match! The support from the crowd was wonderful to hear after such a long hiatus from the Stadium, and I’m sure everyone who participated and watched would agree, it was absolutely fantastic to be back! Well done U9 girls!