The Inaugural U10 Chris Hattam Trophy 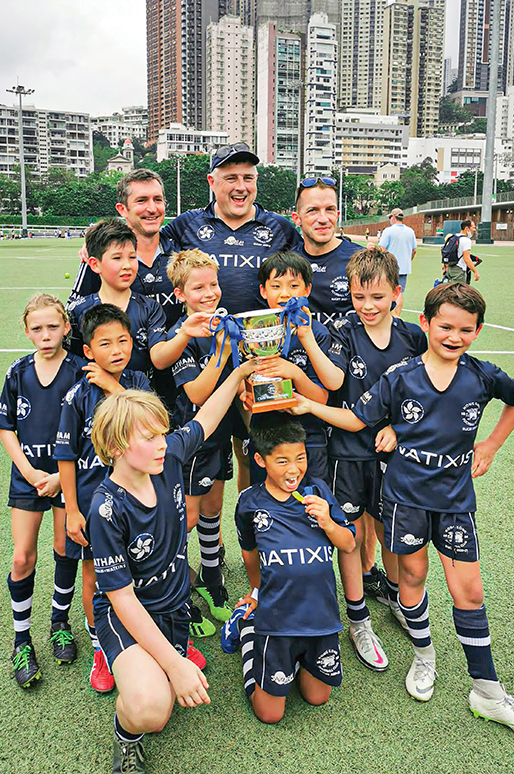 The Inaugural U10 Chris Hattam Trophy

2020/21 season sees a new marker for Hong Kong’s mini rugby calendar. Recognised alongside the U12 Richard Hawkes Trophy, the U10 Chris Hattam Trophy includes round robin competitions before knock-out games. First played on May 2, 2021, Club U10s managed to land the win – forever engraved as inaugural winners on the silverware.

One of the bleakest moments of the 2020/21 season was losing our mate, fellow coach, mentor, the wonderful Chris Hattam. Chris was a long-standing rugby coach and teacher at KGV in Kowloon, and passed away far, far, too early in December 2020. Chris coached for many seasons and had fingerprints over pretty much everything mini rugby, including U10s as his last full coaching season.

Thanks to Club chair Denis Brock for clearing extra Happy Valley pitch space, allowing space for a tournament of one hundred players, involving twelve U10 teams from Valley, Sandy Bay and Club, and 28 top games of mini rugby.

To ensure meaningful and close games, two pools were played. Five teams entered Pool A and competed for the U10 Chris Hattam Trophy itself, including two teams from Valley, one from Sandy Bay and two from Club: HKFC1 (Tigers), coached by James Wood and HKFC2. (Lions), coached by James Mendes.

THE U10 FINAL
HKFC1 started undefeated in their pool. Following a very close semi-final the team made it through to the final against Valley, playing in front of nervous but expectant crowds. While the pool games showcased exciting and expansive attacking play (including skilful off-loads, wider passing, moving the ball into space), the final saw a return to “Route 1 Finals rugby”: hard-running, pick-and-go, strong defence. Club players were simply magnificent and showed great character – contesting every tackle and breakdown and simply refusing to allow Valley to score. A late short-range surge from Thomas Wood edged the trophy win.

WELL PLAYED CLUB! CUP WINNERS!
While the win reflected efforts from our 60+ players over the season, well done to all who represented HKFC1 on the final: Ollie Howarth and Paddy Metson for their speed and attack agility, Thomas Wood and Simon Ferreira Danjoux for playing “powerhouse’’ roles, Gus Grewcock and Andre Chan for solid hit ups and defence, and Genraku and Taraku Kinoshita, our hugely talented “double trouble” twins, for their aggression, speed around the pitch and unflinching will to win. Well played to them all.

Special mention to Iola Cairns for her contributions to HKFC1, one of two remaining U10 girls still playing mixed rugby (the other is her great friend, Naomi Chan). Iola’s thundering tackles during the final were central to Club defence. Iola capped her final session with a 50m solo run, which triggered (another) standing ovation!

THE U10 TROPHY PRESENTATION
Our thanks to Rowan Varty for handing the inaugural U10 winners their trophy. Rowan is a former student of Chris Hattam who absorbed his rugby spirit and carried on rugby to represent Hong Kong in international colours. Rowan said it well: “He taught us to be the fiercest of teams in the most gentle way.”

This wonderful underline to rugby is something we hope all the U10s, from Valley and Sandy Bay and Club winners, losers, coaches, parents absorbed from this special tournament.

Thank you also to Club volunteers who made this U10 tournament sparkle. Hosting a dozen teams, several dozen coaches, and a hundred players, needs many hands. Pitch monitors, stop and start horners, mathematicians, photographer and the donor of the Chris Hattam Trophy itself. It was a big show and thank you all.