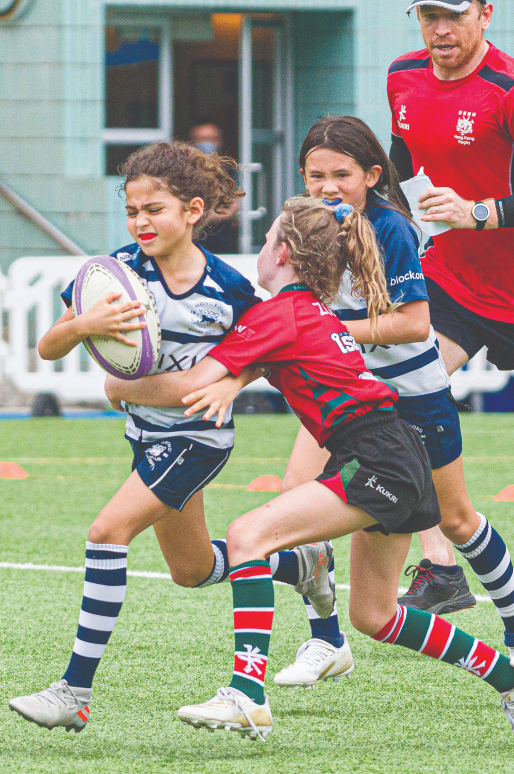 Chris was a firm believer in sports for all and would not have wanted the girls to have missed out! The inaugural Chris Hattam Girls Cup Tournament took place on 12th June and the FC1 White showed signs of
becoming the class of the division.

The FC1 girls finished with three wins during regulation play against DB Pirates (6-2), Tigers (7-0), and finally against FC2 Blues (6-1). These matches were far more competitive than the scores would indicate. On a fortunately overcast summer day, the girls were matched up against a resilient DB Pirates going into the finals. Coming off their victory over the Tigers, the Pirates were fired up to win in the final. On an individual level, the FC1 girls put on a very physical tournament, with Amika Potgieter putting pressure on the

opposition throughout, aided by hard tackling by Naomi Chan, as well as Agnes Liu, who hit the rucks hard. On attack, the team was led by Ellen Loo, who was the best ball carrier of the day, breaking tackles, and making ground. Assisting on attack was Amber Bourne, who worked hard to make ground and made good breaks into space. The offensive champion was Danielle Leung whose pace and sidestepping made her unstoppable in scoring 5 tries for the day. In support were Amy Yu, who ran the length of the pitch to take the offload and score a try, and Maleha Jastreboff on the wing who had some good breaks and worked hard to defend her touch line. All round utility player of the day was Jessica Cowan, who demonstrated strength in open play – regularly rucking and ripping the ball. The kick-off star performer was Edie Greenwood, a drop-kick restart specialist who put pressure on all of the opposing teams and drove them back to their own try line. With great teamwork and great resolve, FC1 brought the Chris Hattam Girls Cup home to Football Club ending the tournament with a hard-fought victory over the DB Pirates (6-2).

For the presentation of the cup - the guest of honour was HK Women’s National 15 Rugby player, Lindsay Varty. Lindsay presented all of the players with medals for their team spirit and rugby ethos in honouring Chris Hattam. Lindsay Varty then said a few words to pay tribute to Chris, who had been one of her teachers at King George V and encouraged her to pursue rugby. Also speaking were Mui Thomas and Duncan Grewcock. Finally, Lindsay Varty presented the inaugural Chris Hattam Girls Cup to FC1 White for the 2021 season. Congratulations girls!