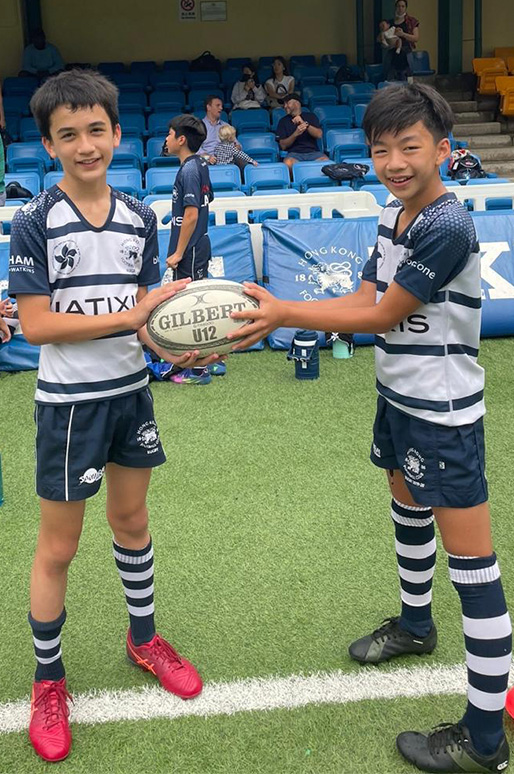 The Richard Hawkes Trophy is the finale for all the things the kids have learned since U4 to U12, and historically the graduation tournament for the players heading into (formerly) Colts. The Club field two team A and B, and both teams have been playing well in the early rounds of the tournament that ended in December of 2021.

HKFC A
HKFC A kicked off against HKU Sandy Bay, and after a slow start, they maintained their edge to win by one try 2-1. Tries from Xavier and Owen. The team came out of the second game with all cylinders firing, first try in under 30 seconds and continued to hammer DB pirates. A whopping 6-0 victory with tries by Andrew (2), Nao (2), Callum and Owen. The final group game was against the team that have haunted us. We came up cautious and we played excellent defence to edge the Sai Kung Stingrays 1-0. Try from James. Top of the table with an automatic entry into the final with the team we had just beaten. After a long wait, we finally got the cup final going for the RHT. We started well, but they drew first blood 1-0, we then answered back with our try of our own from our skipper Callum. However, a lapse in focus allowed them to put on 3 more, and at the final whistle we were down 1-4. The score did not reflect the closeness of the match and we look forward to part 2 next season. We fought hard and can hold our heads high. Come next season we will be wiser, smarter, and physically more ready to take it to them again. Well done HKFC A!

HKFC B
After an unbeaten season to date, both competitive and friendlies, HKFC B were looking forward to continuing momentum and qualifying for the Plate. First match was against a combined team from FK/TSW; they had been stiff competition before the restrictions. Our boys got off to the planned strong start scoring in the first move from kick off, and went on to win comfortably 5-0. Tries: - Jimmy (2), Zach, Rory, and Jairo. Great performance, with resolute defence when needed, combined with well-supported attacking flair. Second match against USRC Tigers was going to be tough, as in previous meetings they proved to be the toughest competition. The boys stepped up for this, running out 7-2 winners and having the game of their lives. Defence was robust and in attack, with the players working in pods of three, the support play was immense and when we attacked, we did so in waves, always another teammate on the shoulder for the offload. Tries: - Michael (2), Zach (2), Jairo, Jimmy, Ryan. What a performance!

Third match and even a loss in this game would have meant still finishing top of the group. So time to experiment and ensure all the squad had plenty of game time with two knockout matches still to come and only a 10-minute break before the next match and Plate semifinal… But the opponents being Valley meant we couldn’t step completely off the pedal. It was a match played with the usual intense rivalry... certainly the Valley coaches and supporters were up for it and screamed the place down with their final try scored after the hooter that pulled them back to 4-4. Tries: - Jairo, Rory (2), Jimmy.

Onto the Plate semi-final and a match against DB Pirates from the A Group. A Herculean performance from the boys. Our big men needed to step up again against the big men of DB. And boy, did they step up. Strength and determination flowed through the veins of our forwards and the whole team defended with steel and togetherness. Despite a close score line of 3-2, the boys were well in control and again worthy winners. Tries: - Zach, Jairo (2).

Finishing in the Plate final against Sandy Bay was going to be a demanding game. The heat of the day and the four matches had taken their toll. The boys were nursing a few bumps and bruises and some fatigue. It was expected that the final would be played over two halves rather than straight through the full 12 minutes. It didn’t end up that way and they played straight through, and with Club poised to bring on fresh substitutes, the final hooter sounded too much confusion with HKU Sandy Bay winning 3-2. Try: Jairo, Jonathan.

The boys were understandably disappointed to lose their first game of the season and with it being the one that counts, the final. Some of these boys have played together since the U5s and it’s been a privilege to see how they’ve developed over these years. To close, and I know all the coaches agree, the HKFC B team did us and themselves proud this season. They were a truly magnificent team as they played for each other, built the camaraderie that is part of this wonderful sport, and showed truly exceptional teamwork and team spirit. A joy to behold. Well done HKFC U12 B!

From a Toddler to young men – the journey of the band of brothers from U12B mini rugby. The year 2013, a group of young toddlers were exposed to the rugby ball for the first time. It was all about jumping, running and having fun with the cones and maybe an oval shape ball. It was a journey that would span almost a decade which these young boys would share the joy, tears, pain, blood and sweat to achieve a camaraderie that few would experience. They would learn the basic concepts of rugby from passing, kicking, rucking, tackling, maul and ruck. The words like “one your right, I am with you, give me the ball, my ball” would be repeated constantly through the years. The boys would develop a bond and friendship like no other could comprehend. The sound of the coaches’ voice shouting at us would echo throughout HV1 or the main pitch, “pass the ball, call for it, ruck, tackle your man, mark your man, come on, ready ready ready!”, these words when strung together would sound like a rock band jamming all the chords at once.

The excitement of going to a mini rugby festival, when we can see other kids of our age and we played rugby...

Like all stories, we have finished a chapter with the season ending Richard Hawkes tournament, it is like we have finished primary school and we are going to junior high school. We have finally made the grade and are now called youth. Looking back, it was fun and we cannot wait for the next season, as now we are no more
called Minis but Youth Rugby. 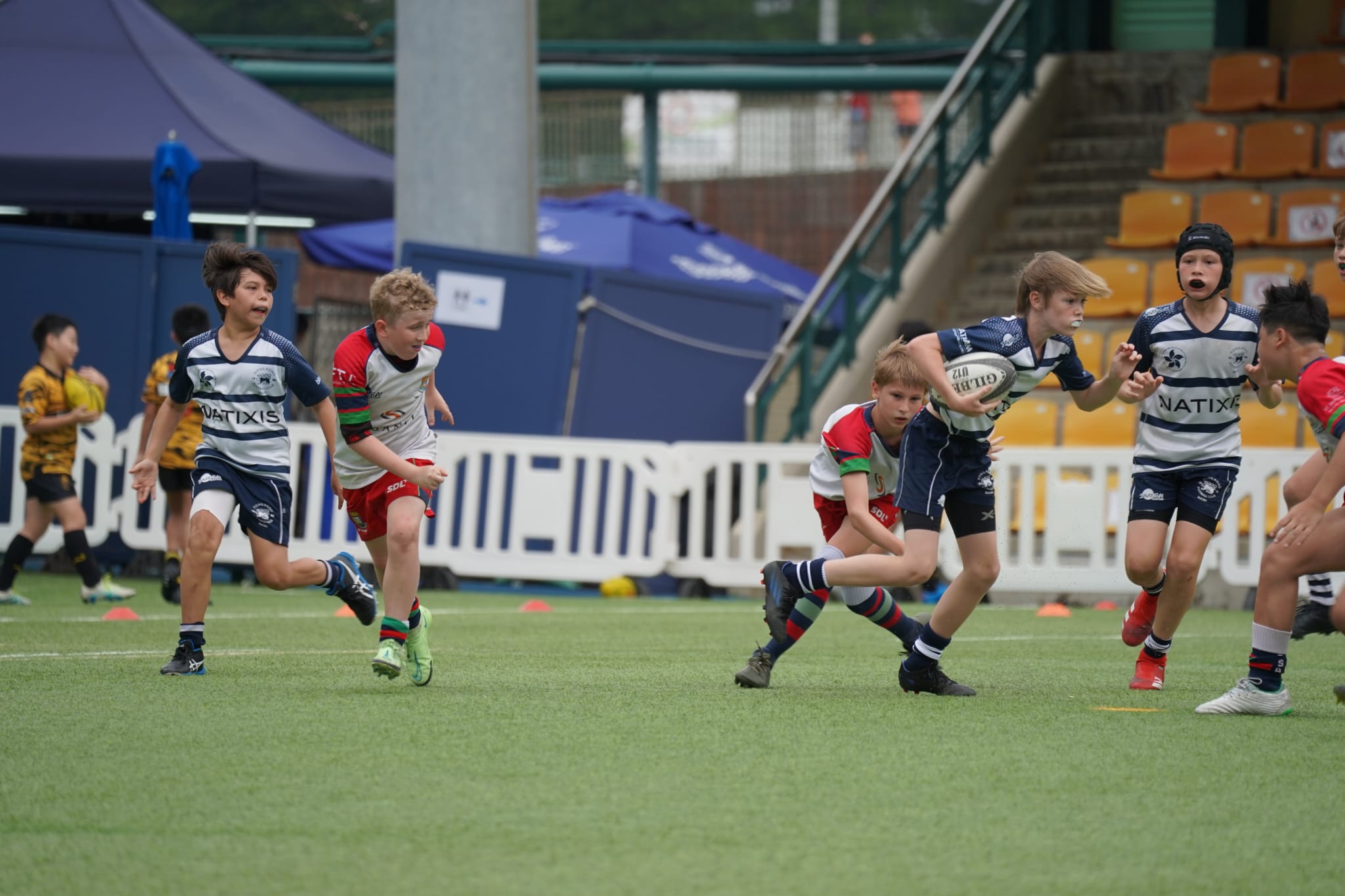