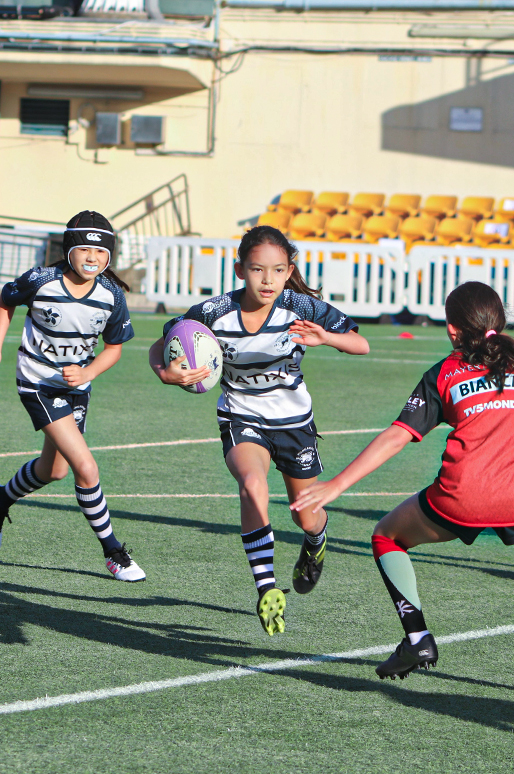 Bright and early on Sunday 28th November, the HKFC U12 Girls rugby A and B teams enjoyed another undefeated morning’s rugby in round 2 of the Kim Lam Cup. Following on from our highly successful display in round 1 of this year’s competition a couple of weeks ago at Sandy Bay, the girls once again showed their superb attitude, commitment, teamwork and skills in the six games in total that we played.

The B team, made up of Kez, Edie, Ella, Darcie, Zoe, Ellen, Maleha, Sabrina, Megan, Ellie, Ines, and Cara, performed extremely well in the second tier of the competition, drawing both of their opening matches against Flying Kukris and Sandy Bay 1 by three tries apiece. The team rounded off its morning with a stirring eight tries to one victory over Sai Kung Stingrays, with special mention to Darcie, who on her return to competitive rugby action, having had a break for a couple of years, was formidable with the ball in hand.

The A team, made up of Milly, Jem, Bella, Emily, Iris, Emma, Louise, Mia, Jess and Romane, are forming an impressive unit and are capable of playing some free flowing and exciting rugby to watch. In their first game, they came up against a focussed and committed Valley 1 team, and the match ended in a thrilling draw, once again, by three tries apiece. The girls stepped up their game to score eight unanswered tries against USRC Tigers in their second game with some lovely offloads leading to some excellent tries. The third game saw HKFC initially up against it versus DB Pirates, who are a physically strong team, but the girls found a way to win by three tries to one despite not being at their fluid best, which is a good sign for things to come.

Huge thanks to all the girls and the wonderfully supportive coaching team.

We must thank and recognise the considerable and tireless efforts of Pete Jastreboff, Chris Caves and Head Coach Rob Wall, who have been organising and running the Kim Lam Cup events so well this year.

Feedback from other clubs has been glowing and it is superb to receive such positive comments such as ‘Thanks to all involved, especially the HKFC crew. Some great rugby out there!’, “Brilliant morning. Thanks all’, ‘Our girls lost all but one game by a pretty wide margin but the grins on their faces at 10am said they had a winning morning! That's what it's all about. See you all in a couple of weeks.’ ‘What a great morning. Well done again for a smoothly run tournament which everyone seemed to enjoy’ and ‘Thanks so much Pete, Rob and Chris - another well run tournament!’ Appreciate all the effort getting it organised!’ Sterling work from the Under 12 Girls coaching team!