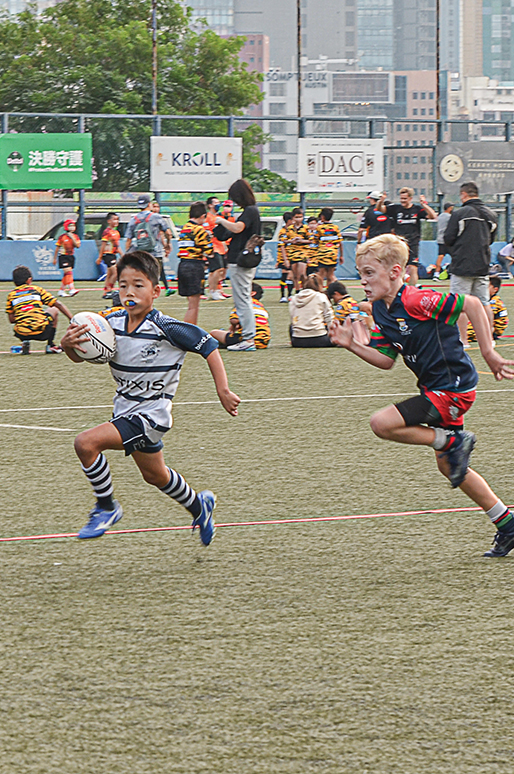 Late October and November saw a return to Mini Festivals, with TigerFest at King’s Park on 31st October and Sandy Bay Festival at the Stanley Ho Sports Centre on 28th November. Given the past two turbulent seasons, this was the first opportunity for some of our younger athletes to participate against other Clubs in a festive environment. Below is a selection of write-ups from across Mini Rugby.

U11s fielded two squads at TigerFest (one A and B) seeking competitive and evenly balanced games. Each team played three games and all six were a treat to watch.

Two wins and a draw for the As. In the first game against Sandy Bay, we showed greater speed and flexibility to come away 5-3 winners. Leading the charge were fabulous twins Genraku and Taraku Kinoshita, providing excellent steals and good footwork in attack. Strong runs from Tomas La Fontaine, playing up from the Bs, and Jamie Michel, newly joined from Stingrays, added to our strength.

We defeated Tigers with a convincing 6-0 win. Elusive running from Hugo Cubells and Naomi Chan helped make the win, plus quick distribution from Quinten Yeung and Luke Holden.

Valley U11s play ‘Joker to our Batman’ – perennial rivals, grudging respect on-pitch, and good mates off-pitch. The recent 0-0 draw at the stadium was followed by a tense 1-1 draw at TigerFest. Excellent physicality from Thomas Wood, breakdown skills from Gus Grewcock and cover tackling form Daniel Jones kept us in it to the end.

In the last play of the game, a beautiful spin pass from Taraku Kinoshita put Ollie Howarth in space for a 30m run to seal the draw. Well played both teams!

It was a tougher outing for the B's with three losses, but nonetheless several positives. Most important being, they had fun and a number experienced their first rugby tournament.

The story of the day was gradual and encouraging growth to find structure. Jackson Whittaker consistently broke the line, culminating in a beautiful switch inside to Len Nakamura who finished for a long 60 metre try. Outstanding distribution from Arde Chan helped get us on the front foot. Real characters from Cameron Riding and Ryley Man showed clear communications to improve the team’s defensive lines. Another to push the opposition out from a blind side attack by Kai Cochrane proved equally decisive.

Lots of passion from the team, well done. If they keep this up as a team, they will overwhelm their next opponents.

Our Under 8s steamed across Victoria Harbour and stormed their way into King’s Park with a series of stylish wins that left their mark on the TigerFest. Playing an expansive style of rugby, our groupings of Lions, Pumas, Panthers and Tigers showed how much progress they are making in their fourth year together.

There were clear improvements in tackling, holding the defensive line and making a burst for the try line that resulted in some intelligent try scoring that caught our opponents off guard.

At the same time, there are signs of intuition coming into their play as the kids start to spray the ball across their teammates, demonstrating a keener appreciation for what the game is about.

While there were a couple of losses along the way, the overall haul of wins shows that the kids are progressing very well.

Above all, the kids played with big smiles on their faces, fueled by a hefty supply of frozen oranges. In these disruptive times, there can surely be no better sight than that. A big thank you to Tigers for being such great hosts.