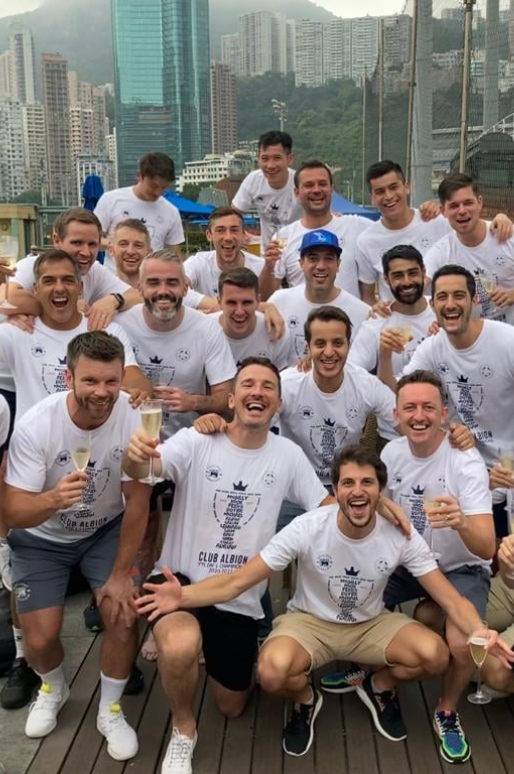 HKFC Albion, playing in Division One of the Yauyee league, sealed their first league title since 2017 on Sunday 25th April at the club.

Such was the side’s dominance this season that they were mathematically confirmed champions with four games to spare - having won 17 of the 18 matches played (their one draw coming against club rivals Wanderers).

Having had last season’s league cancelled when in the top spot, it has been a long time coming for this group of players. And despite a range of obstacles - from the pandemic and all its implications to broken legs and shoulders - the side has shown remarkable consistency by managing to stay unbeaten over the last two seasons.

The league title was confirmed with a 5:1 victory over Spartans, a win which was welcomed by manager Nick Day and coach Daniel Villena who can now focus their attention on the cup. Spartans were quick to congratulate the new champions and handed Albion a bottle of champagne after the final whistle in a thoughtful gesture. The celebrations then started on the pitch and continued off it into the late hours
- Albion delighted to finally get the rewards for their efforts. Veteran Captain Tom McGillycuddy will look forward to lifting his 3rd League trophy on the final day of the season.

Other standout matches this season included a 3:0 victory over main challengers Club Wanderers - thanks
to a brace from league top-scorer Michael Hampshire and a battling 1:0 victory over Colts having played
the majority of the game with 10 men. Playing a wonderful attacking brand of football, the team had the perfect balance of a mean defence and a free-flowing attack, which was superbly anchored in the middle by Adrian Worth and Lenard DeHaan.

Goalkeeper Liam Grant, went on a 10-game run without conceding a goal. While goals were never in short supply - the side averaging over 4 goals a game. Michael Hampshire extended his lead in the league of top scorers to 25 goals in search for his first YYL Golden Boot award with teammates Fiachra Macardail on 14, Mathieu Boyer on 14 and Albin Brion netting 2 at the weekend taking his total to 7 respectively at the
time of writing.

Albion’s attention will now turn to become the first team in Yauyee league history to record a league and cup double. You wouldn’t bet against them!