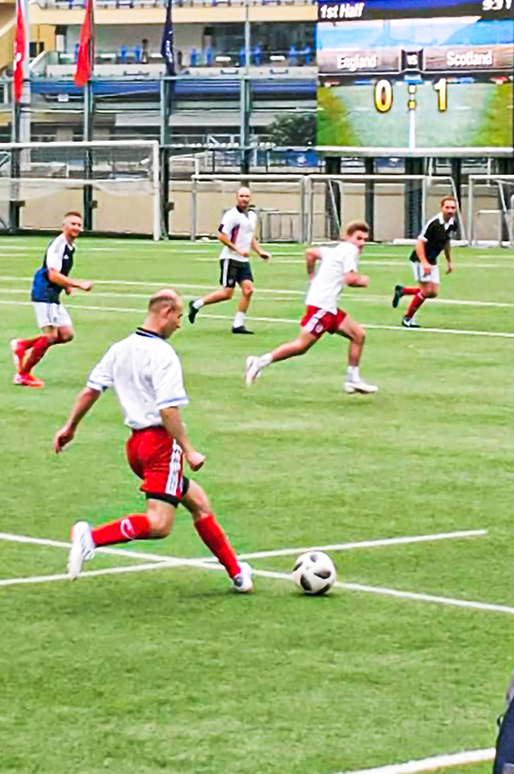 The famous England vs Scotland game was back on Boxing Day after last year’s COVID related disruption, and it proved to be an entertaining affair.

The England warm up described at its best as “disorganised” and at its worst “shambolic”. Manager Robert Scott was quick to deflect blame (what’s new?).

The Scotland warm up was similarly disjointed - no doubt a result of the language barrier evident between the multi-national side.

The game started in comical fashion with the Scotland side scoring directly from kick off. Perhaps the first time in this fixture’s history a goal was scored without a single English or Scottish touch of the ball. 1-0 Scotland.

England were quick to reply with the Chairman Robert Bacon slotting home a fine finish from the edge of the box. 1-1.

Scotland then took a hold of the game with two quick goals from Antoine Sahaghian and Matt Zoeller after some lax defending from the England backline (just head it Rory).

Antoine continued to terrorise England and scored another goal to make it 4-1.

The defending on show was dodgier than Scott Semple’s recruitment policy.

England then responded well with 2 goals from Noa Fjelddahl, the first a backpost header and the second a cracking individual effort. 4-3 and all to play for.

After 35 minutes Callum Beattie finally started to run… unfortunately it was the result of a dodgy Christmas dinner, and after he rushed off the pitch to deal with the emergency, Matt scored his third to make it 5-3.

The second half saw the introduction of the Vets players.

The equaliser came from another good goal, Fitzy wrong footing the goalkeeper with a good strike from the edge of the box. 5-5.

At this point Scott and Robert began a fascinating game of managerial chicken, both twitching and threatening to bring the big guns back on the pitch. Thankfully, a stalemate was reached, and both agreed only to sub on over 35s. “We respect the spirit of the game” was heard from the Scottish bench, muttered by either the Frenchman or Brazilian sat in blue.

England finally took the lead, with Grainger Senior playing one of his textbook slide rule passes through to Grainger Junior who finished well to make it 6-5.

The final goal of the game came from Rob Winmill who had worked tirelessly up and down the right side and deserved to get on the scoresheet. 7-5.

England became back-to-back winners with Rob Scott quick to take credit. Scott Semple was gracious in defeat (whilst sober) and vowed to recruit more aggressively next year. After the fourteenth rendition of Scotland the Brave by the Hong Kong Pipe Band, it was back to the Sportsman’s Bar for some leftover turkey and ham.

Thanks to all who participated, and we look forward to next year’s game.