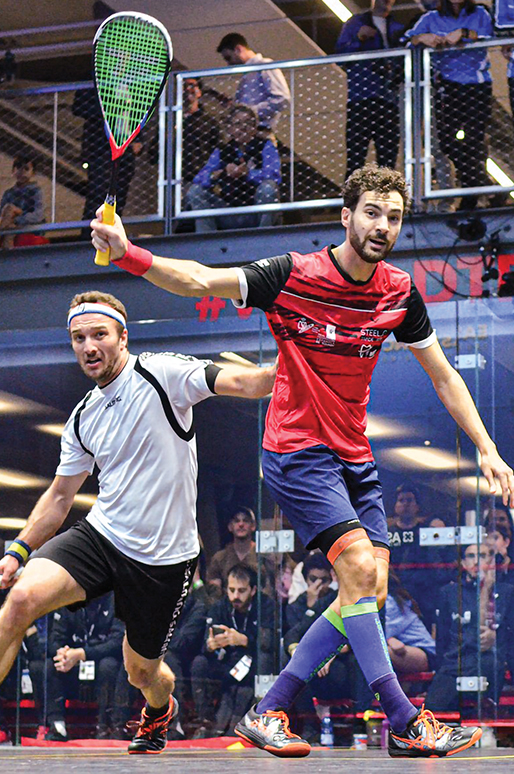 So Carlos, you’ve been in the HKFC Director of Squash chair for just over a year now. What’s been your favourite part of the job so far?

“I love every single bit of it. The Club has an amazing atmosphere. The committee is very very supportive. The Squash Section is vibrant. 1 year looks like 1 month to me!”

What were some of the initial challenges you faced when you first started this job and how do you find your role has evolved over this past year?

“The main goal was to create a solid structure that covers all the areas of the Section. From Juniors to Masters. Our Junior Squash Academy has now more than 100 kids. We have 7 coaches working at the moment. We’ve organised all sorts of events for adults as well. Leagues, training, tournaments, friendly and not-so-friendly matches, Club nights, clinics, camps. Looking back now, I don’t think we've had an empty weekend since the courts reopened after COVID.”

I know we have a lot of big and exciting events/developments to look forward to on our squash calendars. Looking at the next 12 months, what are you most excited about?

“Definitely, I’m looking forward to when the borders re-open. That means that we will be able to watch international squash again at the HKFC. We’ve also placed a bid to host the World Team Championships at the Club, if we manage to win that bid (fingers crossed), we will have to start working on it since day 0. We also want to make a big thing out of Division 1, both for men's and women's, but most of the top players from HK are now “stuck” overseas playing tournaments.”

You retired from being a pro player after what you described as one of your proudest achievements - representing Spain in the World Championships and reaching the quarter finals. Was it hard to transition from being a full-time squash player to this job?

“We made the quarters, lost to France, that was tough to digest! But yes, it’s always an honour to play for your country. I have done it for 12 years, and when I look back, I feel very very proud with all the achievements we had. We reached the final of the Europeans in 2019 for the first time ever … On another note, I used to do coaching as well at home, and I’ve always wanted to do what I’m doing. So the transition was nice and smooth. I think it came at the right moment as the tour stopped for 18 months.”

The past 12-24 months have been turbulent across the world and no exception for yourself! You’ve retired from being a pro player and became Director of Squash at the HKFC, moved to HK, had the birth of your first child and moved your family across the world to HK … Did I leave anything out? How have you coped with everything?

“Sounds like a lot of things happened in the last year yes!! But I just took it day by day, and trust me, time flies!! I’ve always wanted to see my baby growing up live and not from a phone screen. So now that I have that, I can’t ask for anything else!!”

What do you think of the standard of squash at the Club and the atmosphere/spirit that we have here generally? How does the HKFC Squash Section as a whole compare to squash clubs you’ve played in or visited around the world?

“It’s an amazing Club. We have all sorts of players! From the very very beginner that wants to learn the game, all the way to semi-professional players that take the game quite seriously. So my daily routine covers all the bits and pieces and I love that!

I've been to all 5 continents playing squash and believe me, I have never ever seen a squash club like this. We have 7 courts, and there are times that there’s no way you can find an empty court! People sign up for training, for tournaments, for league. The feelings that people have for the Club is just fantastic!”

Do you ever miss life on the pro tour?

“NO! I've done it for 12 years. I have achieved a lot of goals (not all of them), but life is about facing new challenges and moving forward. I'm on a different stage of my squash career now, and I'm where I want to be and doing what I love the most!”

We’ve touched on it already, but how would you sum up the past 12 months as Director of Squash in one sentence, and what would be the one sentence to describe your hopes for the next 12 months?