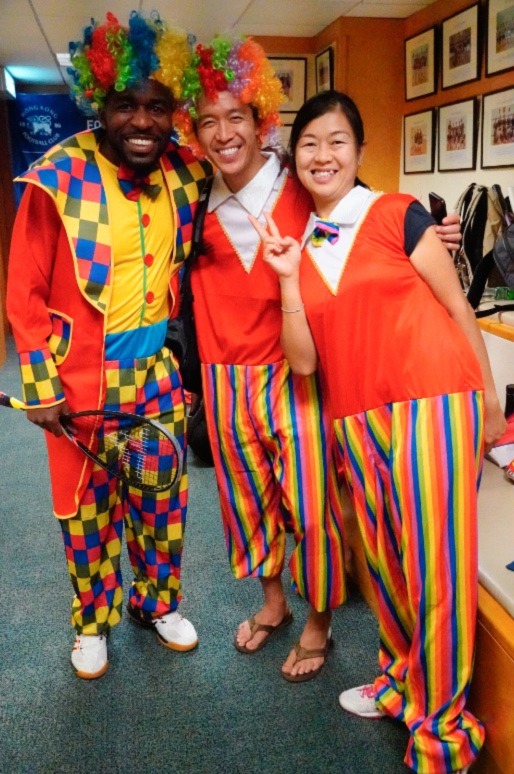 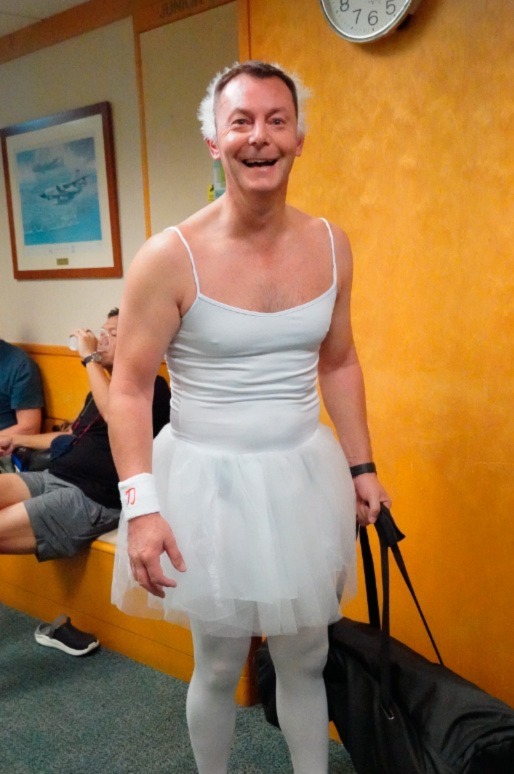 The Annual Wing Ding Squash Tournament is the ever-cherished and revered tournament of the social calendar year for Squashers, and this year proved to be another big hit. Hosted by our HKFC Squash Section this 19th November, teams from across Hong Kong came together to compete in (an almost) non-stop fiasco which rolled on from 9am with final games concluding at almost 6pm! 13 teams of 13 players began their journey of a fast-paced round robin tournament which really tests the engines. 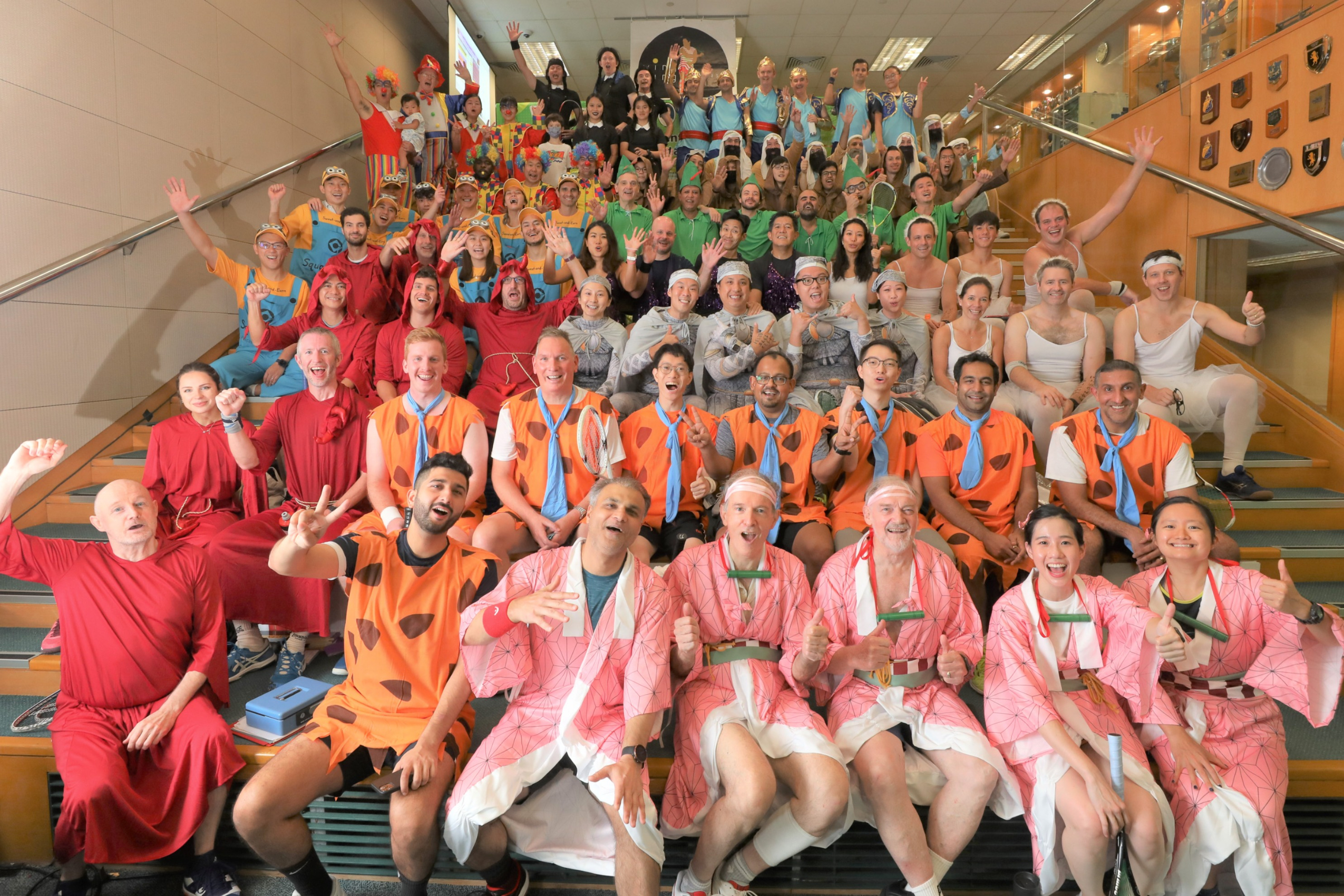 HOW IT WORKS
Players begin their first matches on the horn and amass as many points for their team as possible. The horn sounds every three minutes, which begins the following round of matches. The catch is there is no buffer time between matches, and matches all occur on different courts. Players must reach their next court and may play on without an opponent even being present… Which is often the case! Each transition time looks a little like Spain’s Running of the Bulls, and is equally as colourful. Did I mention, all players are in dress-up? Enter the next complication…

COSTUMES
Each team is given only one dimension to fulfil their team’s costume, a colour. Other than that, it is free reign. Leather? Spandex? Denim? All acceptable, and indeed advised. This year, we saw the likes of: the Red Devils, some ballerinas in White, the Flintstones in orange, the Yellow Minions were a pretty cool outfit, we also had the Blue I-don’t-know-whatthey-were’s, and in black was a whole team of very realistic, very beautiful Wednesday Addams’. A colourful display of humans, matched only possibly by a Wyndham Street on Halloween. I feel that some of the participants are particularly keen to get back into their outfits owing to the excess leg they got to show out there… Especially that last team. Phwoah.

COURT SPRINTS
One rather painful phenomenon added to the agenda this year was the court sprints. To suffer the indignity of reaching a court only to be told to run for three and a half minutes. Running back and forth inside a wooden box of almost 10 metres in length, otherwise known as a squash court. One particular ding-dong head, Gergo Schlösser, set us a record of 56 court sprints on that fateful day. No mean feat! However, he went on to lose his following matches as he tried to regain his breath over the next few games. “That wasn’t smart”, he very accurately later realised.

WHY?
You don’t always need an excuse for a dress-up! In this case however, all proceeds raised through donations, player fees, and raffle tickets went to SCMP and RTHK’s Operation Santa Claus, whose beneficiaries included worthy charities such as Children in Need, the Pathways Foundation and Riding for the Disabled, amongst many others. A huge thank you to the event’s main sponsors St. James’s Place, Hill Dickinson, Burke & Company Solicitors and Squash-Me, without whom all of this kerfuffle couldn’t happen. Needless to say, this year the infamous Wing Ding raised a whopping (and over-target) $412,400! A fine excuse for a sweaty, social, squash romp indeed. Well done everyone involved and as always, to friends and family for your support.

BUSINESS TIME
Okay, now for the business end… The numbers. Well firstly, the ever-keen Max Lee from HKFC Vice Squad was dropping bombs all day and scored a whopping 230 pints as the event’s top scorer! On a raw points basis, we had Team Squash Gear in third place with 2,019 points. In second, we would have team Blade Revolution if not for their rather surreptitious sneaking in of a BONUS 201 points for best costume, boosting them into the lead narrowly over HKFC Vice Squad with 2,038 points! Well done to Blade Revolution who took the competition not by squash but by showinma bit of leg. I’m lookin at you Phil Head and Dave Robinson. Who says looks don’t matter, eh? Rather interestingly, if you tap 2,088-2,038= into a calculator, it tells you that only 50 points separated first and second this year, so a tight comp it was!

Thanks again all for a full day of fun for a good cause, not to mention the exceptional squash which was only mildly boosted by many of Hong Kong’s current laying professionals! Shout out to the absolute superstars including Max Lee, Alex Lau, Tomato Ho, Henry Leung and Tsz Wing Tong who took time out from their schedules to join the commoners, having a hit for Operation Santa Claus.