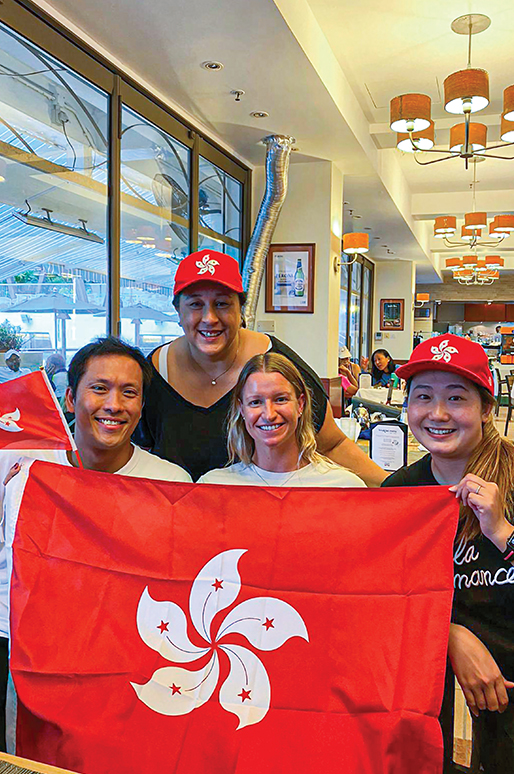 The Swimming and Triathlon Society is home to several Olympians who have all reached incredible milestones in their own right. Arthur Li is one of our very first Olympians to join the Club, and is a valuable member of our team. For over the past 10 years, he has been committed to the Swimming Society as both a competitor and a coach.

Arthur, is a former Hong Kong swimmer who competed at the highest level in the 1988 Seoul Olympics when he had just turned 16 years old. He then went on to compete in 1992 Barcelona and in 1996 Atlanta. For many, competing at the Olympic Games is the pinnacle of an athlete's career, but competing at multiple Olympics, even more so.

It was a real privilege to be able to sit with Arthur and discuss his experience and his journey to the Olympics. Especially as at that time he went on to become the fastest Hong Kong swimmer during that time, breaking two national records in the Atlanta Olympics 1996.

During our discussion, we also paid tribute to the incredible record-breaking week in Tokyo 2020 for Hong Kong swimmer Siobhan Haughey, as we witnessed her outstanding performance gaining two silver medals which made her Hong Kong's first-ever Olympic double medal winner. Her performance sparked intense interest, excitement and conversations amongst members of the Swimming and Triathlon Society, especially amongst our very own Olympians.

We sat down with Arthur last month to talk all about his Olympic journey.

Where and how did it all begin?
Arthur was raised in Hong Kong and started competitive swimming at 11 years of age. “As a child, I suffered from asthma. My doctor said swimming was good for me and luckily I took his advice. Back then, we weren’t allowed to watch TV on weekdays, so doing sports seemed like the best thing to do.” Arthur spent his early years training with Barracuda’s Swimming Club (now Harry Wright International), doing two-hour sessions five times per week. “I was struggling in my first year but began winning competitions at the age of 12. I had that same routine until I made the Olympics in 1988. After that, I started to train with the National Squad in addition to my club (B.S.C.) training, spending up to 16 hours per week.” He described the earlier training days as being very hardworking, but in a fun environment.

How different was the training once you entered a higher-level of competition?
“At our peak training for serious competition, we trained up to 25 hours a week. A typical workout will begin with a ‘light warm-up’ of between 500m and 1,000m ‘easy’ swimming, then progress to 12x100m sets. Then drills followed by the ‘serious’ swimming of 12 laps paying close attention to technique. On top of this, we would do light resistance workouts in the gym between two and three times a week”. Arthur explained that swimming workouts became more about quality not quantity.

What have been some of your other most notable achievements?
Arthur participated in four events in 1988, seven events in 1992 and three events in 1996. He held as many as 7 long course Hong Kong records at one time. In 1999, Arthur retired from swimming at age 26 after competing in the FINA World Swimming Championships (25 m) which was held in Hong Kong in 1999. “I won a bronze medal in the Asian Championships in 1988, and was voted Hong Kong Swimmer of the year in 1991, 1993 and 1996.”

What was your most rewarding part of the Olympic experience?
Arthur's favourite swim race at the Olympics was the 100m freestyle. “The Olympics produced an amazing atmosphere, where people are performing at their absolute best. The atmosphere was uplifting like you are in a trance, and it was so loud with so many spectators. My favourite Olympic city was Barcelona. The atmosphere was incredible and the town was beautiful”. During this time, Arthur met a lot of friends during his competitions, and he is still in contact with many of them from around the world. He met many famous swimmers during his competitions, and described Alexander Popov and Matt Biondi, as his favourite swimmers.

How has the Olympic experience changed over the years?
When we asked Arthur if could help to share a photo of his time during the Olympics, he explained how it was different back then. “There were not many cameras, and limited technology. The rules have also changed, and the stroke technique has improved significantly.” Better performances can be attributed to better training, coaching, and dietary techniques, but many technological shifts in the pool have come in the lead up to each Olympics. More notably standard trunks to streamlined swimsuits. “I wish I would have been able to experience wearing the high-tech swimwear fabric.” These LZR high-tech swimsuits were worn in the Beijing 2008 Olympics and controversially had a tremendous impact on the competition results.

What advice do you have for any of our young swimmers who aspire to reach a high-level of competition?
“Never give up, just keep going. Youngsters who are thinking of taking up swimming must be prepared for a lot of work. They have to enjoy swimming and enjoy working out. Deep down they have to love it if they want to be successful. There are no short-cuts to success. Swimmers must spend a lot of time in the water. They must learn how to coordinate their body movements properly, just like walking on the ground. Anybody can start young. When I was 11 years old, I was already into serious training.”