Mayank Vaid Did It Again! 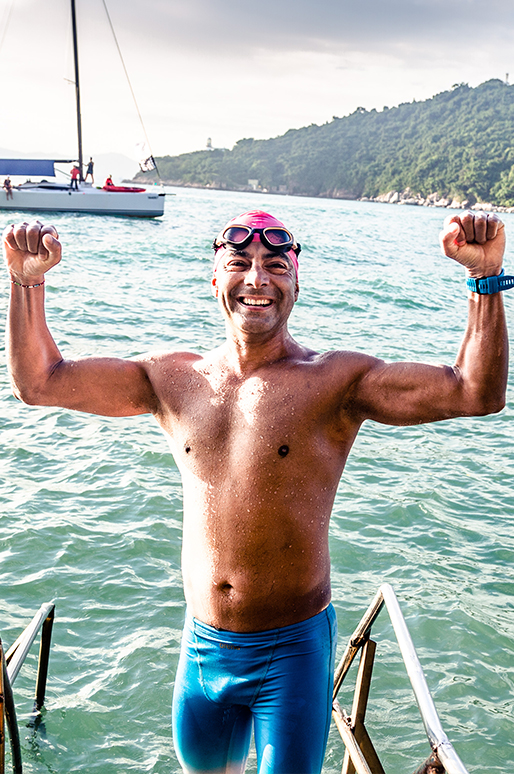 Mayank Vaid Did It Again!

The First Person to Swim Around Hong Kong Island Twice

HK360 is a 45km swim circumnavigation of Hong Kong Island. Mayank did it in 2020 in over 18 hours and did it again in November 2021 in a time of 14 hrs and 35 mins, an improvement of almost 4 hrs. Although he still has to beat the record established by Society member Alex Fong in a time of 10 hrs and 43 mins, this remains an incredible achievement for someone who picked up swimming late in his sports career.

It is our honour to interview him. Let's know about him more!

What is your background? How long have you been in HK? And when did you start swimming?
“I am married to Theresa, and we are blessed with three kids. I have been in Hong Kong since 2009. I am a practicing solicitor and work in-house for a French retail group. I learnt swimming as a life skill when I was 3 yrs old. That skill was mainly to save us from drowning in lakes and rivers and give my parents peace of mind. I started to learn swimming as a sport in 2016.”

How long have you been doing open water swimming?
“Since 2017. In 2018, David Gething and I relayed the Arch 2 Arc Triathlon which includes swimming the English Channel. So, I had no option but to push myself to more open water swimming. In 2019 I did Arch 2 Arc solo and that’s when I really got much deeper into swimming in the ocean.”

What decided you to face this crazy challenge in the first place in 2020?
“I was training for a second Arch 2 Arc solo attempt in summer of 2020, but that event was cancelled due to travel restrictions. I had a fair amount of training in me, so I decided to put it to use by doing HK360Xtreme which starts with swimming around Hong Kong Island. The event attracted the attention of corporates who were keen to give to the community. We were able to raise HKD 385,000 for InspiringHK Sports Foundation and Outward Bound Hong Kong to support Sports Coaches who were impacted by venue closures during the pandemic.”

And usually, when someone does something inhuman, they decide never to do it again. Why did you decide to do it again?
“During the 2020 event, I was not able to give my best. A week before my swim date I managed to cut my left foot with a barnacle. I was Stand up Paddling with my boys and while playing a treasure hunt with them, I sliced my foot. I left the hospital 3 hours later with 6 stitches on my left foot. Doctor advised me not to swim as I risked a serious infection due to the deep wound, possibly losing my leg. But we had put so much into the event. Mercedes-Benz, Redbull, Reckitt, etc. were some of the corporate donors to the event. InspiringHK Sports Foundation and Outward Bound Hong Kong had prepared a brilliant charity programme that would benefit from the funds raised while I swam, biked and ran around Hong Kong, Kowloon and NT. So the event had to go on. Painfully, I finished the event. My foot healed very fast. My leg was still good, but I felt that I was not able to give my best, hence my second attempt just for the swim part.”

Can you describe your preparation for this challenge? How many km do you swim per session, per week?
“I was swimming two times a week in the HKFC Swimming Pool. 3 open water sessions during the week. Finally, one long open water swim at the weekend. When I started building up the base, I swam 100km in 20 days. Then I started to build more volume and distance. During long open water sets I always had a kayak supporting me. During peak training weeks, I did 50km of swimming. I was forced to reduce and even stop running and biking to save time and energy for swimming.”

How do you train for things such as fatigue, and staying in salty water for 14 hours?
“By going and doing long open water sets. Not focusing on distance but train by spending more time in the ocean. Start with 6hrs swims and build up to 12hrs in the water. Swim course should be such that you only touch the ground twice, at start and finish. Swim in all conditions, no matter what. Swell, typhoons, heavy rain, thunderstorms, force 5-6 winds, chop, clean or murky water, are all part of training. Each such swim made me stronger. One swim course included swimming from Sai Kung to Bluff Island and coming back via Shelter Island, HKUST. That was a 26km swim in rough conditions.”

What was the most difficult part of this challenge for you?
“I love running. I had to stop running and gain a few kilos. This was hard because I had to give up something I really enjoy. Second was time away from family on weekends. I was gone for 16-18 hours for open water swims. I would swim past junks with families and kids having a beautiful family time, and that hurt the most. “What am I doing here?” I should be with my wife and kids right now. Thirdly, the uncertainty around the swim date. Typhoons now last until November and a typhoon can cause serious disruption to the swim plans. My swim was already rescheduled once this year. Finally, the last 8km was very hard. I didn't train for the last 8km. This was a stretch between Ocean Park and Sai Wan Swimming Shed. This was where the swimmer is exhausted. The ships in the East Lamma Channel brought big bow waves. There was very little tidal assistance. I had a sore shoulder from the big swell and chop for last 6hrs. Kenyan marathon runners train for the last 10km of their marathon. They train to manage the pain. I forgot to train for the last part. This was the hardest part.”

As the saying goes, "Good things come in threes”. So, when are you going to do it for a third time?
“You are so right. We are blessed with three kids and I think that's very good already.”

During the challenge, when you want to pee, and there is no toilet around, what do you do?
“This part is an enjoyable moment in the swim because I must stop thinking about anything and concentrate on peeing while keep on swimming. It’s a peaceful moment.”