A Guinness World Record, Born in The Club

A Guinness World Record, Born in The Club

The Swimming & Triathlon (S&T) Society, together with the Sports Desk, organised the Running Festival between 16 and 25 September 2022. During this period, Club members came together to run on treadmills in the Fitness Centre. One treadmill had a different purpose during this period. It was reserved for a Guinness World Records attempt. Mayank Vaid, a member of the S&T Society, was undertaking an attempt to set the fastest aggregate time to complete 10 marathon distances in 10 days on a treadmill (male). 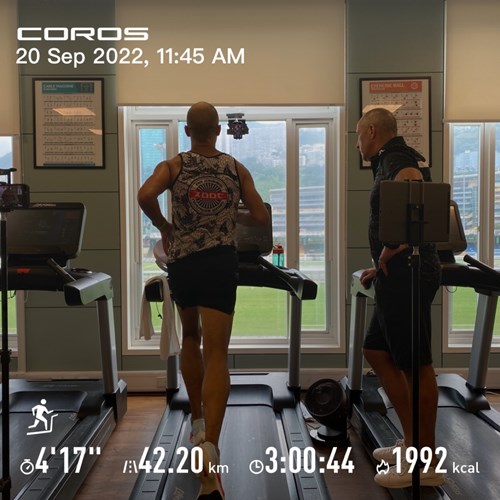 Planting the seed
Back in June 2022, when Hong Kong still had 7-day hotel quarantine for inbound travellers, Vaid was forced to explore ways to kill time while being confined to a hotel room. With the help of some friends, he managed to have a treadmill in his room. And if he ran a marathon each day, he could possibly keep himself busy for up to 4 hours every day.

After discussing with his coach Nigel Gray and wife Theresa the possibility of running a marathon each day for 7 days, Vaid was convinced that this was a perfect challenge. So, between 4 and 10 June  2022, he ran a marathon each day while in confinement, posting his runs on Strava, Facebook and Instagram and getting support of family and friends to keep going. Not realising that one of his friends in Canada, Jason Skillicorn, was closely monitoring Vaid’s marathon progress during the confinement. Jason is an elite runner and coach. At the end of the confinement period, Jason shared an article about an elite ultra runner who had just completed running 10 marathon distances in 10 days. That lit the spark!

Support came from all directions
Vaid filled out the online registration form on Guinness World Records (GWR) website to compete in the category for the fastest aggregate time to complete 10 marathon distances in 10 days on a treadmill (male). The GWR team contacted Vaid promptly with a lot of questions about Vaid’s capabilities and briefings on strict guidelines GWR follows on attempts.

Simultaneously, Vaid contacted Rupert Edgerton Puels, Chairman of the S&T Society, showing his intention to attempt the event in the Club. Rupert was open to the idea and contacted the Sports Desk. Green lights all the way and seemed like everyone was in it like a team. Game ON!

Strict Guidelines
GWR has very strict guidelines on attempts. The Sports Desk had to have 3 treadmills calibrated per factory standards. Corner of space for Vaid to attempt the marathons for 10 days. Prepare for possible technical failures, power outages and sufficient support for the 10 days. The Sports Desk was very helpful in arranging two independent witnesses for the 10-day period. Independent witnesses, unrelated to Vaid, the Club or the organiser, were required to fully witness every marathon and give detailed written statements of what happened, what the distance covered was and in what lapsed time. They must also write down details of any rests or stops. Further a manually entered run logbook would capture the start and finish time to each kilometer and if any pauses are made. Further three video cameras would capture Vaid’s daily marathons. So, this meant approximately 10 hours of video footage each day for 10 days. Vaid would upload all the evidence and GWR’s Adjudicators based in Hong Kong would examine all the evidence from each marathon each day.

Dream team
It was a team effort. Vaid was one small part of the attempt. The Sports Desk staff together with Fitness Centre team were key for a successful attempt. The S&T Society members came along and ran with Vaid each day to give him company through the touch moments. Rupert was there every day, running, watching, encouraging Vaid to get closer to the finish line. Simy, Elton, Charles, Kelvin, Anson and some many others from the Sports Desk were simply amazing. Vaid felt he was in real good hands. The treadmills at the club are a class apart. The equipment in the Club is very well thought through with top class maintenance. One really feels that it’s a Hong Kong’s leading Sports Club. 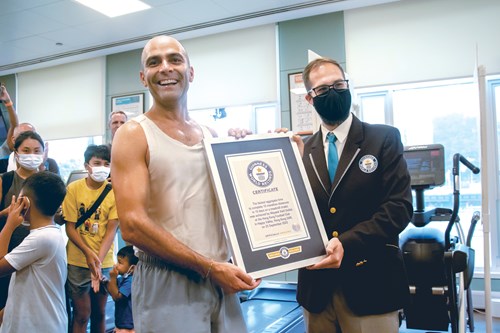 Nutrition, Recovery & Science
Nutrition wise, Vaid mainly relied on sports drinks (Gatorade, Pocari Sweat) during the runs. In post-run recovery, Vaid would eat noodles or rice-based meal within 30 mins of finishing the run at the Coffee Shop. He was in office each day before and after the marathons and went about normal daily life. Good sleep was key for fast recovery. During this period, Vaid was also being studied by the University of Hong Kong’s Sports Medicine Team. They were analysing the changes in proteins in blood and microbiota in the guts. Hence, blood and stool samples every two days were being collected. Changes in lactate, VO2 max and maximal HR were also studied by HKU.

On 25 September 2022, the GWR team witnessed the 10th Marathon and announced that all the guidelines have been met and Vaid has now set a Guinness World Record for the fastest aggregate time to complete 10 marathon distances in 10 days on a treadmill (male). The final aggregate time is yet to be confirmed by GWR Adjudicators. Reading the book as a kid and then being in the book is special.

Huge thanks to everyone involved in this project including the Club Members who patiently supported this event. Many thanks to so many members who came along and cheered Vaid during the hard patches or the “desert” sections before he could see the “palm trees” (as Rupert called the last 10km of each of these marathons).