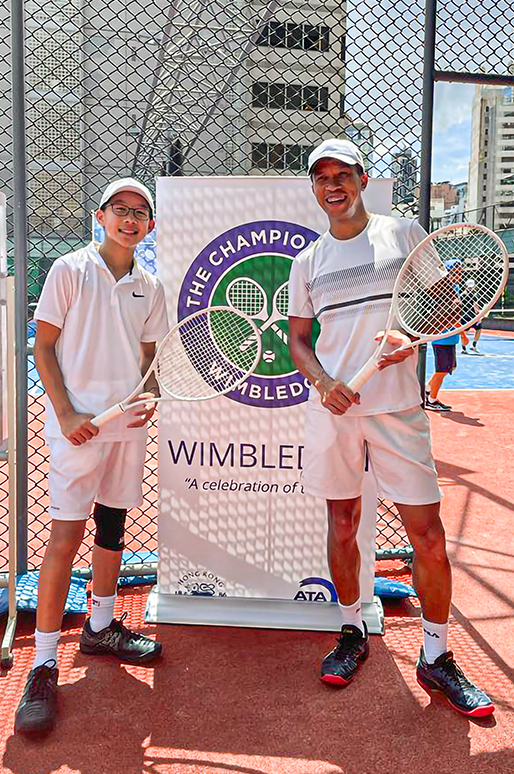 For the start of our Tennis Family Interviews, I decided to interview the Quach Family! I'm sure most of you know, but for those that don't, Jonathan Quach recently became the Chairman of the Tennis Society. Jonathan has two sons, Christian and Hayden, and all three share the same passion for tennis. Jonathan plays for the Men’s B team and Christian and Hayden for the Junior A and B team respectively. Let’s find out a bit more about them.

When did you start playing tennis?
“I think I was 10 or 11 when I started playing at school.”

What inspired you to play?
“I've always enjoyed playing racquet sports and loved watching Wimbledon when I was a kid, so I think that was what inspired me to play.”

If you could change one thing about your tennis, what would it be?
“The list is too long! There's a lot of things I think I need to change, but I would love to be able to hit a backhand top spin like Stan Wawrinka or Dominic Thiem from anywhere on the court.”

What inspired you to become Tennis Society Chairman?
“Inspired is probably not the word ... I wanted to give something back to the Tennis Society and be more involved, create more awareness and build a bigger tennis community within the Club. We have great players, coaches and one of the best sports facilities in HK, so we're very blessed to be able to have access to all that we have.”

Out of everyone in your family, who is the most interested in tennis?
“Me and close second my boys, although I think Christian knows a lot more about what's going on in the big tournaments than I do.”

What is more stressful: to play a match or to watch your kids play?
“Definitely more stressful watching my boys play. I can remember the first league match Christian played in and I was coaching him on the side lines (which you're not allowed to do), and I was getting too involved! Subsequently, a certain Head Coach reminded me subtly that I'm not allowed to do that or he has to kick me out!”

What is your favourite grand slam? Australian Open, Roland Garros, Wimbledon or US Open?
“Good question! They're all great to watch but the first slam I went to when I was still at school was Wimbledon. My cousin and I managed to get tickets through the ballot for a match on Centre Court to watch a ladies singles match which I think was a Russian tennis player called Natalia Zvereva and someone else. The old Centre Court felt so big and we had seats quite high up, but it didn’t matter because it was amazing to be there and watch.”

Who is your favourite current player?
“Ooo ... another tough question ... Federer is still current right? ”

Finally Djokovic or Medvedev?
“Oooo ... another toughie, but I think it has to be Djokovic for his mental toughness! Even when he's two sets down, he can still pull back and win, a true champion!”